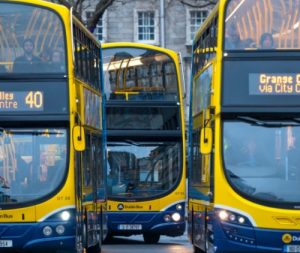 Free public transport will be available for pilgrims attending the papal mass in Dublin on 26th August.

Public transport will be free within Dublin, while Bus Éireann services from outside Dublin will work the weekday timetable on 26th August. These are just some of the measures being used to promote public transport as the means of transport during the visit of Pope Francis.

“Every bus, train and tram is being used for this event. For the safety of the travelling public, if you have a ticket for the Phoenix Park you will be allowed to travel for free within Dublin on the day of the event,” said Tim Gaston, director of public transport services with the National Transport Authority (NTA).

In addition, Bus Éireann will be operating a weekday service throughout the country to bring people to the event. In excess of 30,000 passenger journeys can be made on the day on Bus Éireann.

Outlining the transport plan for the papal visit, An Garda Síochána urged pilgrims to leave their cars at home, use public transport or coaches, walk to specially provided transport hubs and to wear suitable footwear.

“This is the largest event Ireland has organised in nearly 40 years. It simply will not be possible to accommodate all the people who have indicated they want to travel by car to the Mass,” said Garda Superintendent Thomas Murphy. “Therefore, we are urging people to go by train, bus, coach or Luas to this event. While walking is inevitable, you will be minimising your walk to and from the event by taking public transport or private coaches.”

Those who have booked a ticket and indicated they wish to travel by car will be contacted next week by the World Meeting of Families, according to the Gardaí. However, there will be no car park near the venue where attendees will be able to park up and walk to the event. While the event organisers have secured additional car parking for this event, these car spaces are for those use park and ride facilities.

According to the NTA, each operator – Iarnrod Éireann, Dublin Bus, Luas, Bus Éireann and Go-Ahead – will commence services from early morning on 26th August especially for those travelling from outside of Dublin. The NTA is working closely with Translink in Northern Ireland and they are providing special rail and bus transport to the papal mass.

Dublin Bus has created seven dedicated papal transport hubs which will take people close to the gates of the park. Almost 1,000 buses will be available to get people to and from the Mass. Park and ride hubs will operate from the Luas at Leopardstown Racecourse, Dublin bus from Belfield, and train from Maynooth and Fairyhouse Racecourse.

The NTA recommends that those travelling from outside the capital should pre-book their passage to Dublin.