Fr Shay Cullen reports on the aftermath of Typhoon Haiyan 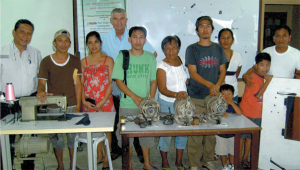 I flew into Cebu City, an hour’s flight from Manila and drove with two Preda staff, starting at 3am to visit the northern towns of Cebu Island on Tuesday, 19 November.

The goal was to reach Daanbantayan, Bogo,and Bantayan Island to assess the storm damage, visit their communities and understand the situation so as to know what the needs are and to deliver aid donations directly to the people in need.

The other equally important goal is to spread awareness about the need to protect orphaned children from would-be abductors and traffickers posing as relatives.

After two hours driving, we entered the disaster zone and the glimmer of lights in the houses disappeared and we drove in total darkness brought on by the typhoon Haiyan.

It is a total blackout and power lines are down everywhere. The moon gave an eerie sense of isolation. The remains of houses stood silhouetted and gave the appearance of a war-torn, bombed-out battle field.

These were once home to over a thousand families and are now a scene of desolation and ruin.

As the dawn light touched the horizon, the spectre of devastation became all the more apparent and I began to realise that I was witnessing storm destruction and personal loss to millions of people. Recovery will take many years.

As the sun rose, I saw a bleak landscape of toppled power poles, once proud towering Acacia trees stripped naked of branches and leaves shamefully naked in dark outline against the dawn sky.

Hundreds of tough coconut trees snapped off mid section, a rare sight of these typhoon hardened trees yet cut in half by a wind that reached unprecedented gusts of 240 kilometers an hour.

Mango trees were toppled, their roots upturned to the sky, totally vanquished the remaining leaves dead.

I was appalled at the extent of the destruction; only the strongest houses of the rich were left standing. I felt awe that all this could be done in the space of two to three hours as the ferocious wind and rain storm swept over the land alike a scythe in a field of barley cutting down all before it.

I have been through ferocious typhoons during my 44 years in the Philippines but have never seen or experienced anything like this for the sheer savagery of this destructive force of nature.

The gigantic force of the wind churned and turned everything it could to flying debris, smashing and tearing at everything, ripping roofs apart and carrying the metal sheets, rafters and roofs into the sky with such force that even cinder block walls collapsed before the onslaught.

Then we arrived at Daanbantayan and were surrounded by wreckage. We met people, listened to the survivors with compassion and were awed as they recounted their terrible ordeal fearing it was the end of the world and were in the jaws of a devouring monster. 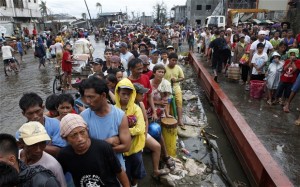 The survivors told me that the coconuts were ripped from the palm tops and fired like cannon balls smashing into roofs and walls.

Their children were frightened and cried as the wind screamed and howled about them and the noise of debris smashing into the trees and roofs was terrifying there; food supplies were destroyed, and the water wells contaminated.

We then drove to the ferry and took a one hour sea crossing to Bantayan island. There, we landed at Santa Fe, and witnessed more damage and destruction of homes and businesses.

The churches had roof damage, yet the greatest damage was in the main town of Bantayan and the coastal area. We took a tricycle and went there. Along the way, we could see more damaged homes and buildings. The poultry industry was wiped out.

We met the Mayor and were impressed with the fast clean up, order and discipline in the town. “We saved many lives”, he said, “we ordered a forced evacuation of the fishing villages, the fisher folk were unwilling at first but then they agreed and were saved. We have had only 16 dead but many were injured, they lost their fishing boats.”

The following day back in Cebu, we witnessed the resilience, courage and bravery of the many Filipinos that are rising above the tragedy.

We met Anna and Jose in an evacuation center in Cebu. Jose is positive, hopeful and holding his new born baby that arrived during the evacuation flight. But Anna was sad and forlorn thinking of her missing father lost in Tacloban and likely dead.

They put on a brave smile but underneath there was deep sadness. We discussed with officials the need to seek out unattached or orphaned children and document and register all especially orphaned children. We will send Preda social workers there to continue this work in all the evacuation centers.

The relief work goes on. Preda has donated rice and other goods to the victims and is working with the University of San Carlos, Cebu to deliver relief aid to the many victims.

We thank the donors who are contributing to this work. Preda is also building awareness to protect orphaned children at risk. Every help is welcome.