Home > News > ‘A time of opportunity for religious broadcasting’

‘A time of opportunity for religious broadcasting’ 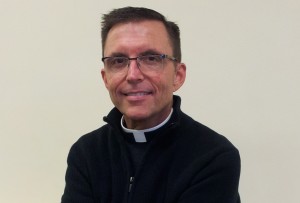 Fr Robert Reed, President of CatholicTV and author of ‘Renewed’

The president of CatholicTV in the US has said he believes the present moment is a time of tremendous opportunity for religious broadcasting.

However, Fr Robert Reed warned Catholic media that it must be willing to compete with the highest standards if it is to attract and keep an audience.

Speaking to CatholicIreland.net on a recent visit to Ireland, the Boston-based priest commented, “I think we need to be more competitive and less churchy.”

He said the product Catholic television produced and the way it transmits the message of the Gospel “has to look just like network television if we are going to attract people to watch and listen.”

“We have to compete, at least in the United States, with the major networks and so we try to do that to the best of our ability with a very small staff and obviously far less resources.”

“We have a beautiful headquarters and three beautiful studios and some very creative and very talented people – but it is a huge challenge every day to try to produce programming that would be attractive to a person who is just sitting flipping the channels – looking for something that grabs their attention.”

In his debut book, ‘Renewed’, the popular TV host issues a creative call to all Catholics to renew the Church by rediscovering the gifts of their faith.

In his book, Fr Reed has profiled ten pairs of saints who offer lessons in reviving faith, starting at a personal level and radiating outwards to the wider Church.

In Fr Robert’s opinion, the best remedy for discouraged Catholics is a reclaimed sense of the tradition’s riches as embodied in the lives of the saints.

The twenty saints were selected because they lived in times of crises when the way forward was unclear.

Some of the pairings at first glance seem to be unlikely companions, such as St Augustine and St Joan of Arc, St Athanasius and Blessed Mother Teresa. But the reader quickly detects the framework which lays the groundwork for personal renewal that is essential for Church-wide change. 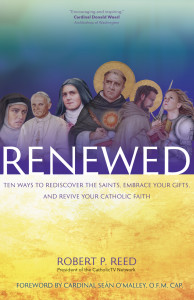 In a down-to-earth and encouraging tone, Fr Reed provides ten practical lessons such as ‘Discover and Receive Your Gifts’, ‘Look beyond the Present Troubles’ and ‘Live with a True Spirit of Joy’.

The publicity for the book states that ‘Renewed’ is a practical plan for the revitalisation of the Church that maps out steps for a grassroots awakening that every Catholic can undertake today – music to the ears of the Church in Ireland.

“The impetus for writing the book was very much in and for the parish – it is written for individuals but it is also written for people to come together in a small group where faith can be shared.”

“I know that ‘encounter’ – a word used very much by Pope Francis – is the basis for our living out the faith. We in this life are meant to come to encounter Jesus Christ and that happens in so many powerful ways: through the sacraments and personal prayer and our communal prayer, but also it happens in our encounter with one another.”

“We believe that the Church stretches beyond the limits of time and space and so we’re very much connected with the great people who have gone before us. People like Athanasius or Mother Teresa of Calcutta or John Paul II. And we are also very connected with people whom we share our faith lives with – our family members and fellow parishioners.”

Asked if any of the twenty saints selected for ‘Renewed’ were his personal favourites, he told CatholicIreland.net, “Obviously Pope Saint John Paul II because I had the privilege of actually encountering him and holding his hands and have him pat me once on the cheek and say ‘Good boy! Good boy!’”

St Therese of Lisieux is another favourite and is the patroness of the CatholicTV network “by virtue of the fact that I decided she was!”

“She has always been a good friend to me and I look upon her and the saints as very much that for us – they are companions with us on a journey; they know us and they pray for us and we can go to them and ask them for prayers as I would ask you for a particular intention to pray for me.”

“And so Therese has always been there for me in my life. I had some very very dark moments, as I think many of us experience in life and when I was experiencing that darkness I went to her for some reason. I was inspired to do that because I was told by a couple of friends you should pray to St Therese and ask her to help you – she always helped me with a rose and some direction and the strength to get through a particular moment. Of all the saints that I mention in the book she is the closest to me.”

He prepared for the priesthood at the Pontifical North American College in Rome and Fr Reed also holds an advanced degree in Television Management from Boston University’s College of Communication.

Ordained a Catholic priest in 1985, he served in parishes in Malden, Norwood, Dorchester, Haverhill and most recently as pastor of Holy Ghost Parish in Whitman, MA.

He was appointed to direct CatholicTV in May 2005 and has collaborated in the re-branding and expansion of the network along with the build-out of a new HD broadcast and production facility.

Fr Reed oversees the creation, acquisition and delivery of increasingly diverse and high quality Catholic programming from around the nation and the world.

Recalling the impact of Pope St John Paul II, Fr Robert tells CatholicIreland.net, “I remember the first time I saw him up close. The different colleges in Rome from different countries would be called in to serve Mass at St Peter’s Basilica or in the Square.”

“At this particular Mass, I was one of the servers and so we were over near the Pieta in a curtained off area and the Holy Father came off the elevator and walked towards us. I just remember being stunned. I don’t know if it was the fact that he was Pope or if it was the white cassock or his personal holiness or all of that together – but it was just a stunning moment and I was transfixed in his presence.”

“There was just something about him and I do believe it is the reason that we now look upon him as one of the blessed in Heaven. I can’t describe it in any other words than that. I was just transfixed.”

In addition to his responsibilities as president of The CatholicTV Network, Fr Robert Reed is also a parish priest in the Archdiocese of Boston, and also often celebrates television Mass, as well as hosting the game show WOW, and co-hosting the network’s signature talk show, ‘This is the Day’.

Currently the CatholicTV Network is available in 14 million homes and operates 24-hour live streaming and has 3,000 television episodes available online for download.