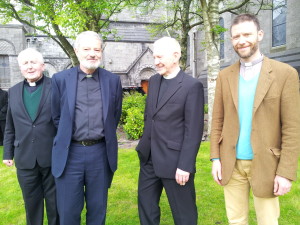 The priest who resigned from the board of the Mater Hospital in Dublin last October when the hospital said it would comply with the terms of the Protection of Life During Pregnancy Act has been appointed by Pope Francis as the new bishop of Elphin.

Fr Kevin Doran succeeds Bishop Christopher Jones who retired two years ago after twenty years at the helm of the diocese of over 70,000 Catholics.

In his address to priests, religious, schoolchildren and parishioners of his new diocese at the Cathedral of Immaculate Conception of the Blessed Virgin Mary in Sligo, the Dubliner said that if the Church seems to be short of younger priests right now, “it is certainly not because God has stopped calling” but it may be “that, as a church, we are not listening carefully enough”.

Bishop-elect Doran, who has acted as National Director of Vocations as well as Secretary General of 2012’s International Eucharistic Congress, said he was delighted to come to a diocese where the permanent diaconate is already established.

Since 2007, Bishop-elect Doran has acted as national director of formation for the permanent diaconate and he said he looked forward to the growth of this ministry in Elphin.

“The diaconate, with its focus on the ministry of charity, reminds us that, as Christians, we are not called to be simply consumers of religion. We are called to be ‘washers of feet’. Each one of us is sent out to serve, in imitation of Jesus who washed the feet of his disciples.”

He also stated that as Christians, “we must be actively involved in the public space, not primarily to control all sorts of projects, but to place our gospel vision at the service of society.”

He admitted there was “a certain sadness in leaving my own home diocese and the parish where I have been very happy” and he paid tribute to Archbishop Diarmuid Martin and Cardinal Desmond Connell and their predecessors for the trust they had placed in him over the years.

Asked if he was concerned about falling attendances at mass, he told reporters, “It is a challenge. I am not entirely sure what the situation is here but certainly in Dublin attendances have fallen off. Having said that, I think we are doing things with people in our parishes which we didn’t do before which is helping to build community.”

Fr Doran has a wide range of experience in teaching, chaplaincy, medical ethics and bioethics.

He was Spiritual Director at the Irish College Rome and taught in the Mater Dei Institute. At different times he served as National and indeed European Coordinator of Vocations for the priesthood and religious life.

He was appointed Consultor by Pope John Paul II to the Congregation for Catholic Education in Rome. He also served as Parish Priest of Glendalough, Chaplain at St Vincent De Paul Parish, Marino, Diocesan Director of the Permanent Diaconate and, most recently, Administrator of the Sacred Heart Parish in Donnybrook. 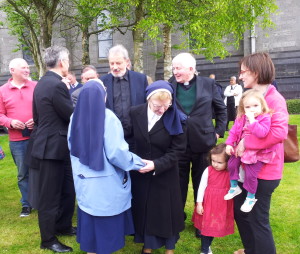 As Director of the Permanent Diaconate for Dublin, he would have worked with Elphin diocese’s permanent deacons in the initial stages of their formation programme.

On an emotional day for Bishop Christopher Jones, he recalled that on 24 May 1994, Bishop Dominic Conway had told the faithful that Pope John Paul II had appointed him as Bishop of Elphin.

“I will be forever grateful for the warmth of your welcome and indeed for the encouragement and support that I have received from priests, religious and the lay people of this diocese over the past twenty years. Even in very difficult times you have remained so faithful and so loyal to the Church you love,” Bishop Jones said.

He told CatholicIreland.net that he had “no special plans” mapped out for the future. “I hope to live around Sligo.”

He said Bishop-elect Doran’s “greatest strength going forward will be the love of the people for their priests” though he also acknowledged that vocations to the priesthood would be a “big challenge because we are scarce on the ground.”

In a statement on Wednesday, the Primate of All Ireland, Cardinal Sean Brady said the Bishop-elect’s “successful preparation, management, and celebration of Ireland’s week-long hosting of the 50th International Eucharistic Congress, attended by about 150,000 pilgrims in Dublin in June 2012, will have helped to equip him for his new ministry.”

He added, “His advocacy and championing of the right to life of the unborn child, and his work in promoting vocations to the priesthood, are but two of the many talents and gifts which Bishop-elect Kevin has shared during his priestly ministry for the good of the Church and of our society.”

The Cardinal also paid tribute to Bishop Jones, describing him as having “selflessly served the people of the Diocese of Elphin since 1994”. He said Bishop Jones would be greatly missed by all.

“His ministry has been marked by his profound faith in Jesus Christ and in the love and compassion of God for saint and sinner alike.”

The most senior ranking prelate in the Irish Church said Bishop Jones had given “sterling service to the work of the Irish Episcopal Conference” and added that he would miss, in particular, his wisdom, experience and friendship at Conference meetings.

“At this time I wish to extend my thanks and prayerful good wishes to Bishop Christy for a long and healthy retirement – it is well deserved,” Cardinal Brady said.

Archbishop Diarmuid Martin of Dublin paid special tribute to Fr Doran’s work as General Secretary of the 50th International Eucharistic Congress and “his great organisational skills in making one of the largest recent events of the Irish Church such a success.”

He also noted the priest’s involvement in many aspects of the work of the Dublin diocese including the preparation for the introduction of the permanent deaconate in Dublin and in the area of medical ethics.

Elphin parishioner, Teresa Murphy, told CatholicIreland.net that the announcement was “wonderful news”. She said it would mean Bishop Jones would be able to take a rest and “have a happy retirement”.

“We will miss him terribly,” she said of the outgoing bishop but she added that thanks to the International Eucharistic Congress, the people already felt they knew Fr Doran. “He was able at the Congress to stand up and strongly articulate the Church’s message – and we need good strong men,” she said.

Rev Alan Mitchell of the Presbyterian Church in Sligo told CatholicIreland.net that the Presbyterian Manse and the Bishop’s house stood close to each other. “We’ve always had very easy communication between over the years,” he said.

“It is a great honour to be invited here,” he said and added that he looked forward to working with the new bishop.

The Diocese of Elphin has 37 parishes, 90 churches and a Catholic population over 70,000. The diocese includes portions of counties Roscommon, Sligo, Westmeath, and Galway. The patrons of the diocese are St Asicus (27 April) and the Immaculate Conception (8 December).