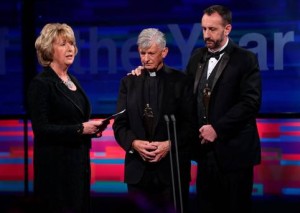 Fr Brendan McBride of the Irish Immigration Pastoral Centre in San Francisco was jointly awarded International Person of the Year at Rehab Ireland People of the Year awards ceremony on Saturday night.

Fr McBride was co-awarded the honour with San Francisco Consul General Philip Grant in recognition of the work they did in the aftermath of the Berkeley tragedy in June of this year in which six young Irish people lost their lives in an accident.

In a statement on Sunday, the Minister for the Diaspora, Jimmy Deenihan said, “I am very proud of the work that Consul General Grant and Fr McBride did following the awful tragedy that occurred in Berkeley earlier this year.”

The Minister said he had personally witnessed their tireless efforts in the aftermath of the accident.

“Their strength and compassion provided assurance and comfort for many during a very dark time. They are both very deserving recipients of the award,” he said.

He was one of ten recipients including British solicitor and human rights activist Gareth Peirce and businessman and Chair of Concern Worldwide Tom Moran.

The Presidential Distinguished Service Award for the Irish Abroad honours the work of exceptional people who contribute to Ireland and to Irish communities abroad.

The awards are organised by the Department of Foreign Affairs and Trade with nominations made by Irish communities abroad through Ireland’s embassy network.

President Higgins recalled on Thursday that he had met Fr McBride on his recent visit to the West Coast of the US and saw first hand the tremendous work he is doing for the Irish community in San Fransciso and beyond.

“Fr Brendan, the Beacon of the Bay Area, provided great consolation and solace to the families of the six young Irish, and Irish-American students who lost their lives so tragically, in Berkley, in June of this year.”

“His quiet, unassuming presence was also a source of comfort to those who were injured, their families and the many, many friends as they struggled to come to terms with their loss.   Your presence helped to convey the sorrow of the nation.”

On Saturday night, the families of the six students who lost their lives in a balcony collapse gave an emotional joint statement at the People of the Year Awards.

Addressing the two men on behalf of the families she said, “Since the 16th of June this year, our lives have changed forever. And we now mourn the sudden and tragic passing of Ashley, Eimear, Owen, Lorcan, Nikolai and Olivia. Our beloved sons and daughters live on eternally in our hearts.”

“The People of the Year Awards provide a unique opportunity to honour those who have made a real difference to people’s lives. Father Brendan and Philip have been instrumental in supporting all of our families as we coped with the early days of our losses in Berkeley.”

Of Fr McBride and Mr Grant, the families highlighted their support for the victims and their loved ones.

“During these toughest days, they offered compassion, empathy and protection at a time when we needed it most. The speed at which they quickly reached out to all J1 students in Berkeley was faultless.”

“The support and kindness they provided to the friends of our children as they came to terms with this tragedy is limitless. This support has been sustained and continues through to the present day, for which we will always be grateful. On behalf of all our families, we believe that both Fr Brendan and Philip’s extraordinary actions are truly deserving of this award.”