Franciscans of the Custody of the Holy Land have called for prayers for a priest who they fear has been imprisoned by militants in Syria.

In a statement the Franciscans state that during the late afternoon of Saturday 4 July, they lost contact with Fr Dhiya Aziz.

The priest is an Iraqi Franciscan of the Custody of the Holy Land and parish priest at Yacoubieh (Province of Idlib, district of Jisr al Chougour, Syria) for both Catholics and Orthodox Armenians.

“Some militants of an unknown armed brigade, perhaps connected with Jahbat al-Nusra, came to take him away for a brief interview with the Emir of the place. From that moment we do not have any more news and we are unable to trace his whereabouts at the present moment,” they state.

In this region the Emir is the authority figure under the local rulers of Al-Nusra Front, the Syrian arm of al-Qaida.

“We are doing everything possible to locate the place of his detention and secure his release. We entrust him to the prayers of all,” the Franciscans concluded their statement.

On Monday (7 July) Agenzia Fides stated that members of the parish community and his Franciscan colleagues are unsure of his fate but there is also hope of a release.

Fides reports that some time after the priest was taken, two militants returned to the parish to get his medication for diabetes and other health problems.

Local sources say this was a good sign as it confirmed that Fr Dhiya Aziz was alive and with his medicines he will be able to stay well.

Fr Aziz was born in the Iraqi city of Mosul in 1974. He studied medicine, and then entered religious life, making a first profession of vows in 2002.

The following year he was transferred to Egypt, and in 2010 to Jordan. Fr Aziz later moved to Latakia, and he then volunteered to serve in Yacubiyeh, a predominantly Christian village.

However, it is also a district in the hands of the local jihadist groups in charge of managing the new political Islamist ‘order’.

Many priests and religious of other Churches and Christian communities fled this area. But in Yacoubiyeh and the nearby village of Knayeh, two Franciscan-led parishes remained open.

The friars continue to provide pastoral care for local communities which have been reduced to a few hundred.

Fides reports that Fr Aziz has always tried to steer clear of political and military issues related to the Syrian conflict.

He cared for the pastoral needs of parishioners and promoted solidarity with others including many Muslim refugees who arrived in these Christian villages. 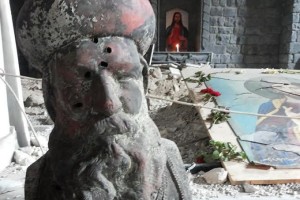 Fr Aziz’ suspected kidnapping is the latest in a series of attacks on Christian religious since the Syrian war began in 2011.

In 2013, a group of Greek Orthodox nuns were kidnapped as was Fr Paolo Dall’Oglio, SJ, and the Greek and Syriac Orthodox bishops of Aleppo. After a time the nuns were returned the others are still missing.

The same year, another Franciscan priest, Fr Hanna Jallouf, was kidnapped together with 20 people from his parish in Qunaya, a neighboring village of Yacubiyeh – the two are less than a mile apart.

In February, the Islamic State kidnapped at least ninety Christians from villages in northeast Syria, and in May, Fr Jacques Mourad was kidnapped at gunpoint from a monastery southeast of Homs.