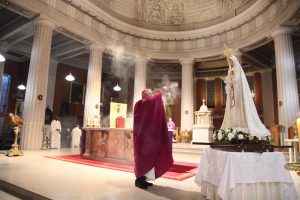 The visit of one of six statues of Our Lady of Fatima blessed by Pope Francis provides people in Ireland with an opportunity to pray for healing, peace and reconciliation, the Bishop of Limerick has said.

Speaking ahead of the arrival of one of the statues in Limerick as part of global celebrations to mark the 100th anniversary of the Marian apparitions in Fatima, Bishop Brendan Leahy said, “We can also pray for continued peace on our island and are reminded of the value of peace by the passing of Martin McGuinness, who threw away weapons of war for an embrace of peace and how we have all prospered as a result.”

He said pilgrims could dedicate this special moment on Friday when the statue arrives in the city to pray for victims of abuse or anyone who had suffered at the hands of the Church.

“Next year is the Year of the Family and Our Lady is the ultimate symbol of the family so we would encourage young and old to come together on Friday and venerate this special statue,” he said.

Dr Leahy urged the public to respond to Pope Francis’ appeal for prayer and reparation for world peace and the promotion of the sanctity of family life.

The three foot high statue, which began its Irish journey in Armagh, will be in St John’s Cathedral Limerick for 2 pm Mass on Friday, which will be celebrated by Bishop Leahy.

Between Mass and its departure at 4.30 pm, the congregation will have an opportunity to pray before the statue.

Pilgrims across the country have also been bringing roses for blessings for the sick and housebound, and white handkerchiefs for the traditional Fatima farewell.

“This is a special opportunity to celebrate the 100th anniversary of one of the most famous Marian apparitions of all. It is a very timely moment to pause and pray for peace within ourselves and for others,” the Bishop said in a statement on Tuesday.

This year marks the 100th anniversary since Our Lady first appeared in Fatima, Portugal on 13 May 1917.

The Vatican has confirmed that Pope Francis will travel to Fatima to mark the centenary of the apparitions.

In the Pro Cathedral in Dublin on 12 March, Archbishop Diarmuid Martin said that the statue of Our Lady of Fatima helps us to reflect on the life of Mary, her joys and sorrows, her love for her son Jesus and her compassionate love for all people.

“We ask her to guide the Church today. We recognise how Christians have failed in many ways to recognise and care for the weakest in society. We ask Mary to help us and our Church be ever true to Jesus and we turn to Mary who called us at Fatima to repentance as we recognise ourselves as sinners.”

He said that while the Church is the place where that new life in faith is encountered, sadly that is not always reflected by the community of believers in Jesus.

“The brightness and radiance of Jesus Christ is damaged by the way in which men and women in the Church and of the Church can often betray that radiance and witness. When an institution becomes trapped within its own self-interest, inevitably there will be those who begin to think that they can act as they wish and can even think and claim that, in doing things as they wish, they are doing the work of the Lord.”

Recalling that when Pope Paul VI visited Fatima 50 years ago, he spoke of the Church as “the depository and the dispenser of the original beauty of Jesus Christ, a legacy of truth and charity”, Dr Martin said Jesus is the supreme light for humanity.

“Anything that damages that light and the ability of men and women to encounter that light is not witness to Jesus, but unfaithfulness of Jesus.”

Archbishop Martin noted that Our Lady of Fatima brought her message to three young children.

“The sad facts which are once again emerging into light around the way children and mothers were treated in Church-run institutions lead us once again to challenge the Church in Ireland to a deep self-examination and repentance.

“It is not something that can be wallpapered over or interpreted by clever spin doctors. Everything must be done to enable the truth to emerge. As believers we must again turn to Jesus and profess that we have failed his teaching. We must confess the role of the Church in the building up of a culture which failed to recognise the presence of Jesus in the smallest and the weakest.”

Elsewhere in his homily, Archbishop Martin said repentance means stripping away from the Church a level of complacency about its past.

“The Church is not called to retreat from society but to be present in society in a radically different way. That means building a Church which no longer sets out to occupy space and power in society, save that power which comes from the message of Jesus.”

“The message of Jesus comes most strikingly through the voice of those who had been made voiceless. Commitments were made in their name and these commitments cannot be reneged on.

Archbishop Martin said the message of the apparitions of Fatima is unique in that it is also a prophetic apparition. It contains references to world events which would later take place: it speaks about world wars and the situation that would evolve for believers through the atheistic communist regime in Russia.

He said he found it interesting that these revelations were made to three children who could not have had any inkling into what these matters were about.

“There is again here the stress on the fact that we can only come to know the God who is revealed in Jesus Christ through becoming like children.”