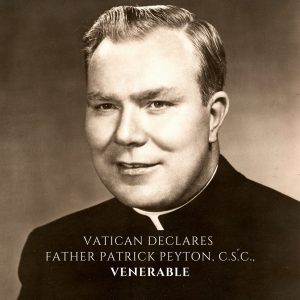 “What a great Christmas gift we have just received!” the Fr Peyton Centre in Co Mayo stated. “We have received news that our Holy Father, Pope Francis, on December 18, 2017 declared Father Patrick Peyton, C.S.C. Venerable. We are filled with joy at this,”

Fr Peyton, who founded The Family Rosary in 1942 to build family unity through the daily praying of the Rosary, is perhaps best known for his saying, “the family that prays together stays together.”

“We are filled to overflowing with joy at this news,” said Rev. Wilfred Raymond, C.S.C., President of Holy Cross Family Ministries, USA. “How exciting and encouraging it is just to write the designation ‘venerable!’ This designation represents a rare recognition by the universal Church that Fr Peyton is a person of heroic virtue and a life worthy of veneration by all Christians.”

Evidence from witnesses and supporting documents on Fr Peyton’s life, virtues, and reputation of holiness were approved by a panel of nine theologians and fifteen cardinals and archbishops who voted to recognise his heroic virtues.

Hundreds of testimonies to Fr Peyton’s heroic virtue and holiness of life have been collected. Tens of thousands of prayer cards petitioning for a favour through Fr Peyton’s intercession have been circulated. Hundreds of favours have been reported, some of which are healings for which there is no medical explanation. 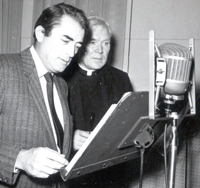 Fr Peyton also founded Family Theatre Productions in Hollywood in 1947. Today both the Family Rosary and Family Theatre are part of Holy Cross Family Ministries, an apostolate of the Congregation of the Holy Cross, United States Province, of Priests and Brothers, of which Ave Maria Press also is an apostolate

Born on 9th January 1909, just outside Attymass Parish, Ballina, Co Mayo, one of nine children, Patrick and his brother, Tom, emigrated to the United States to join their sister, Nellie. His wish from boyhood was to be ordained a priest but his family were unable to meet the cost of his education.

In the United States he was able to fulfill his dream but during his final year in the seminary he was diagnosed with tuberculosis which at that time was incurable. Fr Peyton was given little hope by the medical team, however he prayed to the Blessed Virgin Mary for a recovery, and his health began to improve. He was ordained to the priesthood on 15th June 1941.

Subsequently Fr Peyton began the Prayer Crusades, which took him all over the world. He also staged hundreds of radio and television shows with many of the famous movie stars of Broadway and Hollywood taking part. Fr Peyton died on  3rd June 1992 in Los Angeles, California.

Another Irish link was the location of a Memorial Centre to the late Fr Patrick Peyton at Attymass parish, his birthplace. The  site was originally parochial grounds donated to a company set up to build the centre. Construction costs were met by Holy Cross Family Ministries U.S.A.(of which Fr. Peyton was the founder) , donations from friends and relatives of Fr Peyton and an enterprise grant from the local authority.