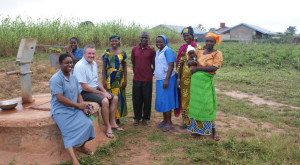 The family of an Irish priest kidnapped in Nigeria have said that they are delighted he has been released unharmed.

Mayo-born priest, Fr Billy Sheridan SMA, who was working with the Society of African Missions in Tungan Gero in the Kontagora area in the north-west of the country, was abducted on Tuesday 12 May last and held hostage up until his release on Friday 15 May.

Speaking to Midwest Radio in Mayo, Fr Billy’s sister Ann said she and her family were “delighted to have him back as our brother”.

It is not yet known who is responsible for the priest’s kidnapping or whether a ransom was demanded in return for his release.

It is also not clear if the group that kidnapped Fr Sheridan are connected to militant group Boko Haram.

Fr Billy regularly returns to Mayo visiting his sister Ann in Westport, sister Breda in Castlebar and his brother James in his native Newport.

He was home for a time in July last year.

Three years ago it was Fr Billy who was tasked with relaying the horrific news to the family of Westport man Robert Gray, following Mr Gray’s fatal shooting in Nigeria.

Fr Billy travelled home to Mayo for the funeral and gave the homily at Mr Gray’s funeral Mass.

At the time, Fr Billy said it was one of the hardest things he ever had to do in his priesthood and he had wished so hard that the news of Robert’s death by shooting was untrue.

“We all live in the shadow of death every day and, living like this, we kind of get used to it and forget how near death is to each one of us. Suddenly it hits us over the head and leaves us reeling like a punch-drunk boxer. We find ourselves powerless, speechless, helpless and hurting.”

Last year he also celebrated mass on Caher Island to celebrate the annual pilgrimage there.