On New Year’s Eve, people in the United States, the UK and across Europe and the Middle East were shocked to read that a 1,000-strong Muslim mob shouting ‘Allahu akbar’ was attacking Germany’s oldest church. 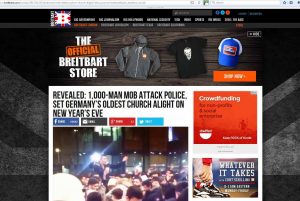 The fake sectarian story on the Breitbart news site

The story, published on the Breitbart News Network website, was rapidly disseminated far and wide. Tens of thousands of people shared the breaking news that the mob had used fireworks to set alight the roof of St Reinold’s, “Germany’s oldest church”.

Trouble is: the story is completely false. For the last week, Germany’s police force has been engaged in a major public awareness campaign to quash the sensational story.

The incident highlights the growing prevalence of fake news, where politically motivated media organisations deliberately publish false information to provoke a reaction among the general public.

Hesse State Justice Minister Eva Kuhne-Hormann said: “The danger is that these stories spread with incredible speed and take on lives of their own.”

German police stepped in because of fears that the report could spark a violent backlash against the country’s Islamic minorities.

The phenomenon of fake news was an unfortunate feature of last year’s US presidential election campaign, when politically biased media and news organisations published lies and falsehoods about their political opponents.

There are fears in Germany that the Breitbart story is a foretaste of what is to come, and that fake news stories will become widespread when the country holds its parliamentary elections in September. The Frankfurter Allgemeine Zeitung newspaper says that already websites are spreading “misinformation and distortion in order to diminish trust in established institutions”.

The German chancellor Angela Merkel has previously spoken about the need to confront the fake news phenomenon and it is believed CDU, her political party, is preparing new legislation to criminalise the dissemination of knowingly false information.

Breitbart.com describes itself as “unapologetically pro-freedom, and pro-Israel”, but its critics say it is a right-wing news organisation that aims to promote an extremely conservative political agenda. Notably, Breitbart’s former editor Steve Bannon has been appointed as a chief strategist by US president elect Donald Trump.

And for the record, St Reinold’s Lutheran Church in Dortmund is not Germany’s oldest church – that honour belongs to the Catholic Cathedral of Trier, which contains elements dating back to the 4th century.