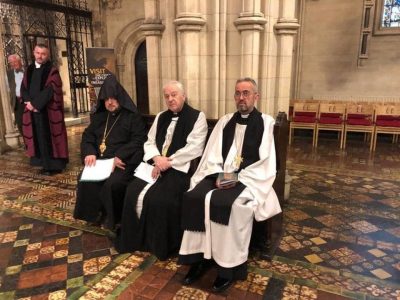 An exhibition exploring the similarities between Irish High Crosses and Armenian Khachkars will run throughout May at Christchurch Cathedral, Dublin.

The photographic exhibition was formally launched last week to coincide with the 104th anniversary of the 1915 Armenian genocide.

A service of remembrance at Christchurch Cathedral was attended by the Armenian ambassador to Ireland, Dr Arman Kirakossian; the Armenian Primate in Ireland, Bishop Hovakim Manukyan, who led prayers at the Khachkar Memorial in the grounds of the cathedral; as well as Archbishop Michael Jackson of Dublin and Glendalough.

Representatives of the Methodists in Ireland, the Moderator of the Presbyterian Church, and members of the Orthodox church as well as the President of the Jewish community also attended.

The Government is being urged by the Armenian community in Ireland to recognise the 1915 genocide in which over 1.5 million Armenians were killed, many of them as they were forcibly deported from their homelands by the Ottoman Empire.

On 10 April, the Chamber of Deputies in the Italian parliament adopted a motion to officially recognise the killing of the Armenians as genocide. Turkey condemned Italy’s move.

Meanwhile, France held its first national day of commemoration of the Armenian genocide on 24 April.

Last February, Emmanuel Macron announced that 24 April would be set as a day of commemoration for the Armenians in fulfilment of a 2017 presidential campaign promise.

France was one of the first European countries to recognise the genocide back in 2001. It is home to an estimated half a million ethnic Armenians. 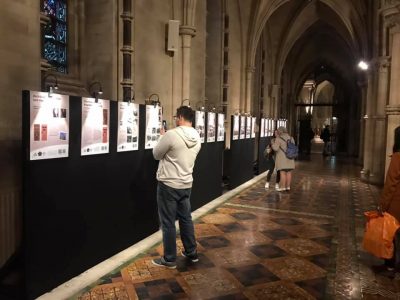 But Turkish President Recep Tayyip Erdogan hit back at France saying nations who accuse Turkey of genocide should look at their own “bloody past.”

A resolution adopted by the Portuguese parliament said that on 24 April 1915 some 250 Armenian intellectuals were rounded up and murdered on the order of the Ottoman government.

The statement noted that “in the years during and after World War I it is estimated that between 800,000 and 1.5 million people were killed as a result of the genocide”.

Turkey denies that the killing of Armenians in the Ottoman Empire constituted genocide.

Pope Francis has described the Armenian atrocities as the “first genocide of the 20th century” and said innocent men, women and children were “senselessly” murdered by Ottoman Turks.

On 19 January 2007, Hrant Dink, a prominent member of the Armenian minority in Turkey was murdered after he was prosecuted three times for “insulting Turkishness” under Article 301 over his criticism of Turkey’s denial of the Armenian genocide.

Dink was assassinated in Istanbul by Ogün Samast, a 17-year-old Turkish nationalist. Photographs of the assassin being honoured as a hero while in police custody, posing in front of the Turkish flag with grinning policemen, later emerged.

At Dink’s funeral, over 100,000 people protested against the assassination, chanting, “We are all Armenians” and “We are all Hrant Dink”.

This month, the Turkish Foreign Minister Mevlüt Çavuşoğlu said at an event at Selçuk University that Turks are proud of their history because they have not committed any genocide.