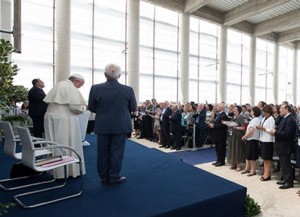 Pope Francis at the Pentecostal church in Caserta

Pope Francis is bringing a new thinking in the Catholic church according to the Chairman of Evangelical Alliance.

Joe Kelly told CatholicIreland.net that in the past there has been an atmosphere and a thinking that divided people who saw themselves as evangelicals or Catholic.

“Now there is a recognition that evangelisation exists across all denominations. The Pope’s message is that people need to come to know Christ.  Keeping Christ as our  mission gives us a huge possibility of working together.”

Mr Kelly made the comments in the week when Pope Francis became the first pope to visit a Pentecostal church.

On Monday he visited the Evangelical Church of Reconciliation in the southern city of Caserta where he met privately with Pentecostal preacher Giovanni Traettino, an old friend.

Speaking to some 350 Pentecostal faithful gathered in the church, Pope Francis apologized for the Catholic persecution of Pentecostals during Italy’s fascist regime, when the practice of their faith was forbidden, and stressed that there was unity in diversity within Christianity.

“Among those who persecuted and denounced Pentecostals, almost as if they were crazy people trying to ruin the race, there were also Catholics,” he said.

“I am the pastor of Catholics, and I ask your forgiveness for those Catholic brothers and sisters who didn’t know and were tempted by the devil.”

Then he in turn asked forgiveness for Evangelicals who had done the same to Catholics.

“I recognize that in history there have been situations where Protestants, including Evangelicals, have discriminated against Catholic Christians and I am really sorry for these kinds of actions, because while we can disagree theologically, this should never lead to discrimination or persecution of the other.

“We all need to acknowledge all our failings and ask each other for forgiveness.”

In the interview on Vatican Radio Dr Geoff Tunnicliffe said that the Pope’s reaching out to Evangelicals “bodes well for future conversations, because that will allow us to go deeper in our interactions together”.

Joe Kelly of Evangelical Alliance in Ireland said there was  a new thinking among Christians at grass root level here.  Projects in Mullingar, Kilkenny and Cork were bringing Christians of different denominations together.

In Mullingar for example, Christian Voices Together involves the Catholic, Church Of Ireland and Presbyterian parishes, the Christian Fellowship Church and has support from the Pentecostal Church. The project, which began in January 2011, aims to help people in the community adversely affected by the economic downturn.

“Jesus prayed ‘Father that they may all be one so that the world may believe’.  I believe the real power of witness of God’s people is only evident when we start to work together and go beyond traditional barriers,” said Joe Kelly.  “With Pope Francis, I feel there is a swing towards that now.”