England will be reaffirmed as Mary’s dowry at noon today

Four days after the faithful in Ireland, Spain and Portugal consecrated their countries, and people’s to the Virgin Mary, 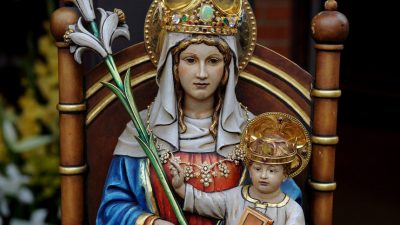 in a bid to seek her protection during the COVID-19 pandemic, England is to be rededicated to Our Lady at midday today.

The rededication of England as ‘the Dowry of Mary’ has been scheduled since 2017, but the ceremony, due to be live streamed from Walsingham, has been given increased urgency because of the COVID crisis.

“The current pandemic is an example of why the rededication is so important at this moment,” said Cardinal Vin Nichols, who asked all Catholics in England to consider what they could personally contribute to the ‘dowry’.

“We are Mary’s dowry!” he said. “Please enrich that dowry by offering to her the best that you can give!”

The rector of the national Marian shrine at Walsingham, Msgr John Armitage, issued a joint statement with his Anglican counterpart, Rev Kevin Smith, that said: “Today, fear and uncertainty about the future is affecting millions of lives around the world and within our own communities and families. We see in Mary one who was not shielded from life’s pain and difficulties. This is why we can look to Mary with confidence and trust in times of sorrow and joy.”

The original dedication of England as ‘Mary’s Dowry’ took place in 1381 when the 14-year-old King Richard II made ‘entrustment vows’ to Our Lady in the hope of keeping his reign. At the time, English law required that, when marrying, a husband should provide his wife with a portion of his land and money, to be able to support herself should he die before her. This was known as the widow’s dowry.

Today’s re-dedication will be the latest in a series of consecrations made by the English Bishops in recent centuries; the first one was made at the request of Pope Leo XIII in 1893.

Preparation for today’s ceremony began at the start of the year, on the Solemnity of the Mother of God on 1 January, when Catholics in England were invited to prepare themselves by praying the Rosary and the Angelus.

A newly-painted icon called The Dowry Painting was then brought to Rome on 12 February by the Archbishop of Westminster, Cardinal Vincent Nichols, Msgr John Armitage, rector of the Walsingham shrine, and the painter, Amanda de Pulford. In Rome, the painting was blessed by Pope Francis and was then brought back to England to remain at the shrine in Walsingham for the re-dedication Mass.