Home > News > Rise in vocations in England and Wales

Rise in vocations in England and Wales 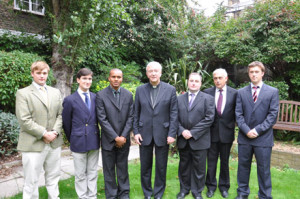 Nearly 100 men and women entered convents, seminaries and religious houses across England and Wales in 2013.

The figures represent a significant upturn in numbers over the past decade.

According to Fr Christopher Jamison, Director of the Catholic Church’s National Office for Vocation, “These figures highlight the generosity of Catholic women and men in responding to God’s call. They also show that the emphasis on discernment before recruitment is working.”

The Benedictine monk warned that there “is no room for complacency” on Vocations Sunday and so the National Office for Vocations in Britain has sent out posters and mini cards to parishes and schools asking people to pray for vocations to the priesthood and religious life.

The National Office for Vocations believes the upturn can be explained by the hard work of those involved in promoting vocations.

“A lot of work by diocesan and religious vocations directors has gone a long way to foster a culture of vocation. In addition, vocation groups have had a part to play and many such groups have sprung up around the country over the last ten years,” Fr Jamison explained.

Some groups have evening meetings that people can simply drop into whenever they want; others ask people to come along one afternoon a month for a year; others invite participants to come together one weekend a month for nine months.

Recently, two dioceses in England set up residential communities to facilitate the discernment of priestly vocations.

The outcome of these new approaches to vocations ministry is more committed lay people and more people entering formation for priestly and religious life.