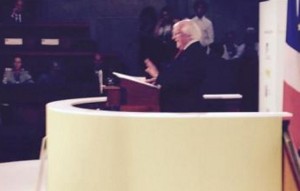 There has to be “inclusive, humane, and non-judgemental engagement with the voices of those most affected by climate change.  We must place them at the centre of the proposed solutions,” Irish President, Michael D. Higgins has said.

Addressing the Summit of Consciences for the Climate in Paris yesterday, President Higgins said described climate change as the “great challenge of our time”.

Ours may be the final generation with the opportunity to effectively respond to the now urgent effects of climate change, he said emphasising the importance of 2015 with its three key meetings in Addis Ababa, New York and Paris, as a “defining moment for the future of humanity”.

The political and technical decisions that are to be made over the coming months may be complex, but ultimately the great challenges of our time are ethical and intellectual in their nature, he said.

President Higgins, addressing the gathering at the invitation of French President Hollande said people needed to “break away from a destructive relationship with the diversity that is life on our planet towards a new paradigm of existence, one that will be built on the respect we must have for the wonderment and renewal of nature”.

The first step was to accept the evidence of science and scientists which indicates that “failure to respond to the scientific reality of climate change may ultimately lead to the destruction of life on our planet”.

He continued: “We must therefore unequivocally reject the position of those who would obscure the scientific reality of climate change in their protection of any narrow and short-term self-interest.” There can be no compromise with truth, he added.

President Higgins said that climate change had an intellectual origin in an excessive pride which regarded nature “as a subject for domination and exploitation” and acknowledged human causes were grounded in “forms of development and industrialisation that were based on the exploitation of fossil fuels, with an assumption of infinite growth”.

“Extreme individualism manifesting itself as insatiable consumption and accompanied by unconscionable levels of inequality, characterises much of what is regarded as the developed part of our planet,” he said. “The narrow paradigm of progress now threatens the destruction of the habitat which our fellow humans inhabit as well as precipitating unsustainable levels of poverty and inequality in our human communities.”

Yet at the heart of most cultures, he said there was a disposition towards ‘ethics’ that sought to “transcend” and was in harmony with the wonders of nature. President Higgins suggested replacing the ethic of individualism and insatiable consumption with “a new thinking, which reconnects us to our planet of diversity, and which sets a new balance between the discourses of economics, ethics and integrated ecology”. 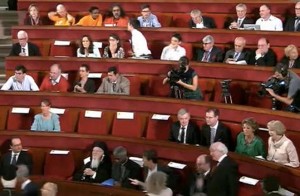 From the spiritual tradition, epitomised in Pope Francis’ encyclical ‘Laudate Sí’ came the concept of “ecology of integration” and from the tradition of human rights, the theory of climate justice as a human right. These can combine to inform “a new ethical framework on which a new harmonious and sustainable paradigm not only of development, but of true security, can be built”, he said.

But the global capacity for change and reconstructing economic models involved “swimming against the tide” and moral courage. “We need inclusive, humane, and non-judgemental engagement with the voices of those most affected by climate change. We must place them at the centre of the proposed solutions.”

He continued: “When history records the actions we take or fail to take at this our moment of truth, we will not have the excuse that we did not understand, that we did not know. We have been gifted, in a global communications order, with the knowledge and the opportunity to act.

He concluded: “Would it not be the greatest of all human achievements if we were to succeed in delivering the benefits of science, the shared wisdom, instinct and intuition of diverse cultures, and the products of reason and faith; and in delivering all of these through new, balanced models of development, ecology and society?

“Then we might say, that when facing the fullness of our challenge, we made the decisions that offered a shelter that protected the vulnerable of the present, and at the same time, offering creative and imaginative possibilities for future generations. Let us succeed together.”