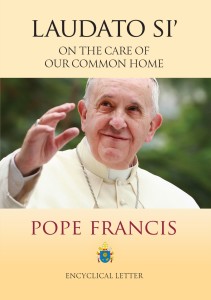 Yesterday Pope Francis’ much anticipated encyclical on the environment, ‘Laudato Si’ (Blessed Be) was published.

In it, the Pope calls for action at local, national and international levels to combat ecological destruction, and in particular the future threat and current reality of climate change.

“The Encyclical, which is addressed to ‘every person who lives on this planet’ clearly aligns the Catholic Church with the growing movement calling for urgent changes to lifestyles and energy consumption in order to safeguard the future of the planet,” says Trócaire.

Pope Francis presents a heartbreaking analysis of the various dramatic environmental situations facing the world today – from the terror of climate change, to biodiversity loss in every habitat, to the growing inequality of finite resources, against a backdrop of over-consumption and waste, which results in many people being regarded as disposable, explains Dr Lorna Gold, Head of Policy and Advocacy at Trócaire.

Speaking in the strongest terms yet in defence of the environment as “our common home” he warns of the unprecedented destruction of ecosystems as a result of human activity, clearly outlining the threats to future generations as a result of our actions.

Calling for an “integral ecology” Pope Francis underscores the human roots of the current ecological crisis in social, political and economic structures.

He points to the need for a radical shift in direction in political and economic priorities in order to meet the needs of the poorest, while also warning that our current lifestyles and consumption patterns are unsustainable.

“This Encyclical is one of the most significant Church documents in a generation,” said Éamonn Meehan Trócaire Executive Director.

Describing the 184 page document as “a powerful wake-up call to a world sleep-walking into disaster” he said Pope Francis had “clearly aligned the Catholic Church with calls for urgent political action to reduce carbon emissions and set the world on the path to a sustainable future.”

Dr Gold said you could not read this encyclical and “not be deeply moved”.

“This is perhaps the most far reaching Church document in a generation. It is both deeply political in its content and in its timing, deeply contemplative and deeply practical,” she told CatholicIreland.net.

In terms of what we can do, Dr Gold said the encyclical pointed to some very practical pathways for action.

“First, we each need to believe that simple actions make a big difference. We need to start by re-evaluating our own understanding of our place in the environment. Pope Francis reminds us that we are made from the elements of the natural world. Reconnecting with our place in nature and refinding that ‘affectionate’ relationship is the unavoidable starting point of an ‘ecological conversion’.” 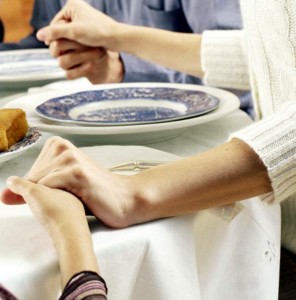 In the letter, Pope Francis places a special focus on families and the role of parents.

He calls on families to start again to practice grace before meals as a sign of their appreciation of nature, and dependence on God’s creation.

He also asks people to consider the Sunday day of rest – as a restorative day for nature and themselves.

In local communities, the encyclical affirms that’ integral ecology’ is central to the Christian message.

Pope Francis calls for an ecological spirituality and asks people to consider how they consume. Each act of consumption is a “moral and political act”, he says.

Reminding people of the power of boycott campaigns, he says there is a need to create a counter-culture based on ‘less is more’ and a new contemplation of nature.

Laudato Si calls on NGOs to continue to work for political change and to organise people to build political pressure for change.

At a political level, the Encyclical highlights the way in which international finance controls politics – at a national and international level, and how this is limiting and distorting the capacity to address common challenges.

There is need for a new way of governing the “global commons” with stronger, effective international agreements to combat environmental degradation, including climate change.

Dr Gold said the Pope’s message was “timely” for Ireland, as its climate legislation is finalised in the next few weeks.

“He points to the need for robust laws to protect the environment – and the need to ensure that they are enacted. These laws should not be subject to the whim of political cycles, but take the long view, thinking of the impact of their enforcement on future generations.”

Éamonn Meehan said Trócaire was dealing with the consequences of climate change “on a daily basis”.

“Drought, flooding, storms and forced migration are all on the rise. Although we are insulated from the worst impacts in Ireland, we must not forget that hundreds of millions of people around the world are struggling to survive in great part due to the changing climate.”

Laudato Si has been widely welcomed.

Well known Vatican commentator, John Allen, said the encyclical “seems destined to go down as a major turning point, the moment when environmentalism claimed pride of place on a par with the dignity of human life and economic justice as a cornerstone of Catholic social teaching.”

The text of Laudato Si can be read here: http://www.news.va/en/news/laudato-si-the-integral-text-of-pope-francis-encyc