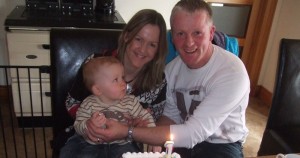 The woman who lost her husband, son and unborn child to a suicidal driver in England while on a family holiday in 2012 has said her faith is sustaining.

“Sure, if this was all we had I wouldn’t be here. I do believe when I go, they will be there waiting for me,” Elber Twomey told the Irish Independent in a moving interview.

The former primary schoolteacher said that before the crash she had a reasonable level of faith, which she got from her parents.

“We would have gone to Mass every weekend. And when Con and myself put Oisín to bed every night, we’d say his bedtime prayers. I’d stay on then and say the rosary.”

After the crash her strong faith saw her through the darkest of days and still sustains her.

Elber’s family were the victims of a horrific accident perpetrated by a suicidal driver Marek Wojciechowski on 6 July 2012.

Elber, her husband Con and their 16 month old son Oisín, were driving through Devon that day in their Volkswagen Golf on the way back from a holiday in Torquay. Elber was five months pregnant.

At 2.47pm, the Polish taxi driver, who was severely depressed and had written a four page suicide note to his wife, drove his car onto the wrong side of the road smashing into the Twomey’s car.

Elber has no recollection of the crash which on impact took her son Oísin’s life.

Ten months later her husband Con died in hospital in Cork from his injuries.

Elber calls the anniversary of that atrocious day her “shut-down day”.

“I just want to be on my own, with my thoughts. I’ll drive to a beach somewhere, I find being by water calming and helpful. Last year after morning Mass, I got in the car and headed for Waterford, turned off my mobile and had a day on my own. It’s my way of dealing with July 6.”

The Cork woman said she was trying to get some routine back into her life.

“I’m making an effort to live.”

Her sleep has improved and although not ready for work yet she has done a number of courses and is moving towards looking for work. Each day she visits the graves of her husband and child.

Arising from the dreadful crash which robbed Elber of her family, she has become involved in a campaign highlighting how to manage the pursuits of people who are depressed or suicidal.

Elber has addressed the officers of the Devon and Cornwall Police force and trainee Garda recruits at Templemore.

“This year, the new trainee gardaí who graduated were the first to have had the new Applied Suicide Intervention Skills Training (ASIST) done, which really is so fantastic,” she said.

In addition, Elber has launched the The Twomey Family ‘Remorial’ Weekend (see www.twomeyfamilyremorial.com) which has raised €90,000 over the last two years for charities such as Pieta House, Suicide Aware (Cork), Inspire Ireland, 3Ts Dublin and Brú Colombanus.

Originally she thought she could not, but months after the crash she found herself lighting a candle for him in a chapel.

“I have forgiven him. If I hadn’t, I believe I would be very bitter and angry and no good for anybody. To forgive him has allowed me not to become bitter.”