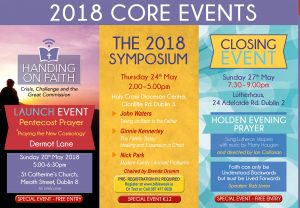 This year’s Ecumenical Bible Week will take place from 20-27 May with the theme: ‘Handing on Faith – Crisis, Challenge and the Great Commission’.

Now in its fifth year, this parish-based ecumenical event is jointly sponsored by the Archdiocese of Dublin, the Church of Ireland Diocese of Dublin & Glendalough, as well as other key groups such as the Scripture Union.

The week begins on Pentecost Sunday with ‘Praying the New Cosmology’, a talk by theologian and Dublin priest, Rev Dr Dermot Lane.

The week’s events will continue in 13 venues across Dublin and its surrounding areas up until 27 May.

According to Gerard Gallagher of the Office of Evangelisation in the Archdiocese of Dublin, two key events will take place in Holy Cross College, Clonliffe in Dublin on Thursday 24 May.

One of these is a symposium between 2-5pm chaired by Brenda Drumm which will include interventions by writer and journalist, John Waters on ‘Taking us Back to the Father’.

Another speaker is Rev Ginnie Kennerley who will talk about ‘The Family Today: Healing and Expansion in Christ’.

The third contributor is Nick Park of the Evangelical Alliance who will speak about ‘Modern Family – Ancient Problems’, drawing from his own personal story.

Pre-registration for the symposium is required at www.bibleweek.ie. Cost €12.

This is followed later that same day by ‘Thinking Allowed’, a chaired panel discussion with audience participation.

Panellists will include three married couples from different Christian experiences, Bernadette and Patrick Barcoe, Basil and Glynis Good, and Alan and Dianne Morris, as well as Archbishop Eamon Martin of Armagh and Archbishop Michael Jackson of Dublin.

They will all discuss ‘What have we, from our personal experience, discovered about living and passing on the faith?’ This event is free and starts at 7.30pm in Clonliffe College.

“The programme has evolved and that evolution has led to a very solid piece of programming around ecumenism and the Bible,” Gerard Gallagher told CatholicIreland.net. 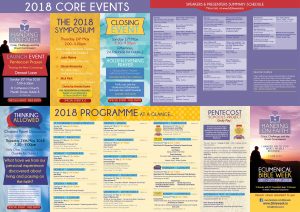 He said the programme “aims to open up the whole question of family and passing on the faith in any Christian tradition – be it Catholic, Anglican, Methodist or evangelical.”

One event will see parish pastoral worker Frank Brown address the topic ‘Can we share our faith without being annoying?’

“I think is a very clever title; in the contemporary narrative, to say that you are from a Christian background is to say you are odd or a bit different…” Gerard Gallagher commented.

He expressed the hope that “Some of the topics hopefully will reflect some of the real questions people are meeting in the parishes.”

Events organised for the week are taking place in three different counties.

The scripture theme driving the week, Gerard Gallagher explained is, ‘I handed on to you what I myself received…’ (1 Cor 11:23)

“Each of the churches has its own problems about attracting young people or keeping families involved. There is huge pressure across all traditions around trying to pass on faith and sustain it within families. They all have the same issues around sustaining communities and what is relevant to practice,” Gerard Gallagher said.

The father of three described Ecumenical Bible Week as “quite unique”.

“I don’t think there is any other similar programme on the island, north or south. This would be a legacy programme from the International Eucharistic Congress and the partnership that was developed ecumenically during that, which has continued. It is jointly funded by the Church of Ireland and Catholic Church in Dublin.”

“There are a lot of external challenges that maybe weren’t there a generation ago. So, it is harder, and I know this from my colleagues in the other traditions as well, as a parent to pass on a meaningful faith and a faith that is lived and expressed on a regular basis in the local parish. There are so many external pressures on young people from sport or culture or peer pressure.”

Gerard Gallagher also highlighted the Pentecost Schools Project, which is coordinated between the churches and the Scripture Union and presented by Claire Devaney and Jane Mellett.

The project is about creating a context for children to explore characters from the New Testament.

This year they have been looking at some of the people in the Acts of the Apostles through an interactive play. Find out more at the following link: https://www.bibleweek.ie/…/pentecost-project-2018-chapeliz…/