Home > News > We have a duty to care for the elderly: Pope

We have a duty to care for the elderly: Pope 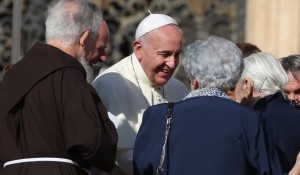 Pope Francis on Thursday criticised those who abandon their elderly relatives saying it is the worst possible affliction the elderly can endure.

Receiving members of the Pontifical Academy for Life, the Pope told them in his address that God promised prosperity to those who honour their parents.

“Palliative care expresses the typically human attitude of caring for each other, especially for those who suffer. It is the demonstration that the human person always remains precious, even when elderly or afflicted by illness,” he stated.

The Pontiff said a person is in any circumstance valuable to himself and to others and loved by God.

“Therefore, when life becomes very fragile and the end of earthly life comes close, we feel the responsibility to look after and accompany the person in the best way possible,” he underlined.

Members of the Pontifical Academy for Life were taking part in their general assembly on the theme ‘Assisting the elderly and palliative care’.

The Pope said on Thursday that “The biblical commandment to honour our parents reminds us in a broader sense of our duty to honour all elderly people.”

He also highlighted that the Bible severely admonishes those who neglect or mistreat their parents.

“The Word of God is always living and we can see clearly how the commandment proves to be relevant to contemporary society, in which the logic of utility often takes precedence over that of solidarity and gratuitousness, even within families”, he continued.

“’To honour’ may be translated as the duty to have extreme respect and take care of those who, on account of their physical or social condition, could be left – or made – to die,” he warned.

The Jesuit said medicine has a special role within society as testimony to the honour due to an elderly person and to every human being.

He added that efficiency cannot be the only criteria governing the work of doctors, and nor can the rules of healthcare systems and economic profit. A State cannot expect to profit from medicine, he cautioned.

The Bishop of Rome remarked that the Assembly of the Academy for Life has studied new sectors for the application of palliative care which until now have been of valuable assistance to cancer patients.

This may now be applied to a wide range of illnesses, often linked to old age and characterised by chronic and progressive degeneration.

“The elderly need, first and foremost, the care of their families – whose affection cannot be substituted even by the most efficient structures or by the most competent and charitable healthcare workers”, he emphasised.

Palliative care is “an important help for the elderly who, for reasons of seniority, receive less attention in terms of curative medicine and are often neglected.”

Abandonment is the most serious ‘malady’ to afflict the elderly, he warned and added that it is also the “greatest injustice they can suffer; those who have helped us to grow should not be abandoned when they need our help, our love, our tenderness”.

Pope Francis concluded his address by encouraging healthcare professionals and medical students to specialise in palliative care, “which does not have less value on account of the fact that it is not ‘lifesaving’.”

Palliative care involves something equally important: it accentuates the value of the person, he said.

“Therefore, I urge all those who, in various ways, work in this sector to carry out their task in the spirit of service and recalling that all medical knowledge is truly science, in its most noble sense, only if it may assist the good of mankind, which can never be achieved by opposing life and dignity”.