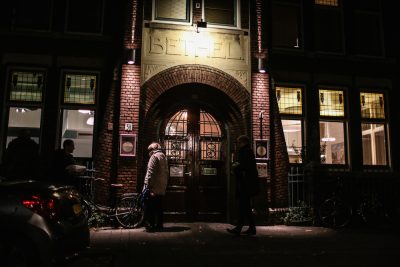 As Christmas Eve dawns today, a marathon church service in the Netherlands is entering its 60th day as worshippers conspire to prevent immigration authorities from deporting a family of Armenian asylum seekers.

The five-strong Tamrazyan family – husband and wife Sasun and Anousche, with their three children, Hayarpi, aged 21, Warduhi, aged 19, and Seyran, aged 15 – sought sanctuary in Bethelkirk, a small Protestant chapel in the Hague nearly two months ago, where they were warmly welcomed by the congregation.

To prevent police entering the building, the parishioners have invoked a medieval law that prevents civil authorities entering a building where a religious service is ongoing. Some 650 volunteers have taken part in the service so far, which has been running 24 hours a day, seven days a week.

Pastors have taken it in turns to lead services for six or seven hours at a time and, to ensure that the religious activity at Bethelkerk can be legitimately described as a service, the parish has organised a rota to ensure that there are at least three people present in the congregation at any time.

The Tamrazyans have been seeking political asylum in the Netherlands since 2009, claiming that because of Sasun’s political activism, his life would be at risk if he were to remain in Armenia, which has been an independent republic since 1991.

However, the family’s application has been refused, with Dutch junior justice minister Mark Harbers repeating this week that he will not use his discretionary powers to grant them residency. He also confirmed that the kinderpardon, a residency dispensation available to families with children who have been in the Netherlands for more than five years, will not be granted to the Tamrazyans.

The Tamrazyans were granted legal permission to remain in the Netherlands, but that was overturned when the government appealed the asylum court’s decision.

There has been a huge public reaction in the Netherlands to this quiet act of prayerful resistance. So much so that the Christmas Day service will be live streamed from the church, which is named after the birthplace of Our Lord.

Such is the interest in the case that pastors from Germany, France and Belgium have travelled to the Hague to lead services.

As Christmas approaches and we remember how the Holy Family had to flee to Egypt to escape persecution, this case has become a symbol, in Dutch society and elsewhere, of how the Church is still a beacon of hope and welcome in an increasingly intolerant society.