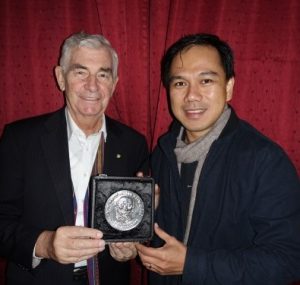 A prominent Benedictine abbot in the Netherlands has paid tribute to Irish missionary Fr Shay Cullen for committing his life “to the liberation, the protection and promotion of children’s rights in the Philippines”.

In his Laudatio for the Columban missionary on the occasion of the awarding of the Martin Buber Humanitarian Award for the PREDA Foundation’s work defending and protecting children from abusers, Abbot Adrian Lenglet OSB of the Abbey Saint Benedictusberg, Vaals said Fr Cullen has striven at many levels “to combat the brutal violations of children’s rights that occur when children are subjected to sexual abuse.”

He continued, “Your commitment to protect the dignity and rights of children is a perfect actual contemporary way to respond to the Gospel of Jesus Christ: ‘What you did for the least of my brothers and sisters, you did it for me.’”

Fr Shay Cullen SSC was in Kerkrade in the Netherlands at the weekend to receive the 2017 Martin Buber Award in recognition of his internationally acclaimed work on human rights in the Philippines since 1969.

The award was presented during the annual International Festival of Dialogue – EURIADE.

Benedictine monk Fr Lenglet acknowledged the difficulties Fr Cullen has encountered in his fight to rescue children, minors and women from the hand of their abusers, describing these challenges as “unimaginable to most of us.

“Social structures, governmental laws, international sex-mafias, personal enmities and blank opposition were and still are trying to stop your effective actions and your fearless protest. In the hundred years of its existence, the Columban Society has known at least seven members who have given their life as martyrs and thus as strong witnesses of hope, faith and love. The possibility that you might arrive at such a destiny yourself is not absent from your life either.

“Arriving in the Philippines in 1969, you saw the distress of children, minors and women and without any hesitation you devoted your life as a Columban missionary to the immense work of putting an end to ‘the abuse, exploitation, trafficking and all forms of violence against and torture of children’, long before this was set as one of the most important goals by the United Nations in the 2030 Agenda for Sustainable Development (Target 16.2).”

He asked what society was doing to restore the dignity of these thousands of abused children and women.

He also questioned “what can we do to help the addicted themselves? The sex-workers, the corrupted, those who are terribly entangled in the structures of sin and crime? What is hindering us to meet any other human being, saint or sinner, as a child of God? What prevents us from practising what Martin Buber called the true relationship between you and I?”

The Benedictine monk said Fr Cullen’s decisive and impressive example confirmed his identity as “a great son of Saint Columban – a true and loving human person.”

Accepting the award, Fr Shay said the award recognised the work of bringing peace and reconciliation to the abused, exploited, abandoned, and jailed children of the world.

“This prestigious award for our work,” he said, “is in the true spirit of Martin Buber’s writings and his stand on making peace in the individual by direct contact with people to address human rights issues.

“Martin Buber’s advocacy of peace-making is based on compassionate listening, understanding the person, affirming each other, and engaging in dialogue directly with people who have or are suffering abuse and human rights violations. It is a philosophy to create the possibility and the chance of peace and reconciliation through full personal relationship between individuals and in society. It is a process of human interaction that brings healing and recovery, individually and in community,” he said.

Referring to his human rights work, Fr Shay stated, “The work of freeing children from abusers, illegal imprisonment and abusive situations and bring them healing from trauma and bring them to a peaceful existence with society is what I have been doing for the past 43 years in the Philippines through the PREDA Foundation with the help of dedicated co-workers.

“I am deeply honoured to be given this award but it is the resilient and courageous children who are survivors and victors who are the true recipients. I accept it on their behalf and I congratulate the awarding committee in their wise and timely decision in choosing the resilient recovering children as the recipients of this award in my person.

“I speak for the many who struggle to overcome adversity and remain without a voice and a representative. The Martin Buber Award is a forum for them to be heard. They are here centre stage. This occasion highlights the suffering and the struggle of abused children and youth to overcome abuse and live again.”

Concluding, he warned that without intervention many child survivors bury the pain and grow up to survive without inner peace and a happy childhood.

“Some will be deeply affected all their lives, some will turn to vent their anger and pain on society through violence, but those who receive essential support and care through personal relationship in the community will recover and become strong and resilient members of society. Some become valuable advocates themselves.”

Fr Shay has received numerous international awards that recognise his work in human rights. His recent proposal to restrict the passports of paedophiles to curtail their travel to the sex tourism trade in the Philippines and other Asian countries has received widespread attention internationally.

Deputy Maureen O’Sullivan has indicated that she is examining how this could be done legally in Ireland.

Professor Martin Buber was a Jewish philosopher who advocated peaceful dialogue, mutual recognition of human rights and dignity, and a united Jewish and Arab Palestine. He became well known internationally for his ‘dialogical principle’.

He died in 1965, and the prestigious award in his memory was initiated in 2002 with German Foreign Minister Hans-Dietrich Genscher as the inaugural recipient.

Since then, recipients have included Queen Silvia of Sweden, President Klaus Johannis of Romania, Soviet President Mikhail Gorbachev, Prince Irene of the Netherlands, and Karl-Heinz Böhm, founder of the Austrian Menschen für Menschen Foundation for Ethiopia.