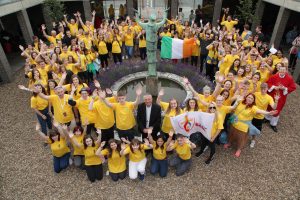 Archbishop Diarmuid Martin with the Dublin pilgrims as they depart from Dublin Airport on Monday for World Youth Day in Krakow in Poland. Pic John Mc Elroy.

Archbishop Diarmuid Martin of Dublin has paid tribute to young Irish World Youth Day pilgrims’ commitment and willingness to give a week to their faith in Poland this week.

Up to 1,600 Irish youngsters will participate in a week-long event that will see up to two million young catholics from all over the world gather in the Polish city of Krakow over the coming days.

Expressing the hope that the 300 Dublin pilgrims who departed on Monday afternoon from Dublin Airport would have a “very fulfilling experience”, the Archbishop reminded them to enjoy themselves because “religion isn’t just about being sad”.

Speaking to CatholicIreland.net, the Archbishop commented on the “somewhat puritanical understanding of faith” which prevailed in Ireland for many years and he added that this was now changing.

“The realities are changing. I think that for these young people this is an adventure but there is also obviously a real commitment – they could be going elsewhere but they have decided to give one week of their year to go to this.”

Speaking in the airport church, he told the pilgrims that “Poland is a country with its own traditions” and recalled his first visit to Poland in 1980, which was a “most difficult time” as there was nothing in the shops. Later martial law was introduced and many people were arrested and rationing was introduced.

“I was ordained an archbishop by Pope John Paul – he gave me this ring,” Dr Martin said holding up his episcopal ring and he said his own visit to Poland would bring back fond memories of that.

World Youth Day was initiated by Pope John Paul II in 1984 and started out with a celebration of 30,000 people but by the time it reached the Philippines ten years later it would set a world record for attendance at a single religious event, with five million present for that epic gathering. 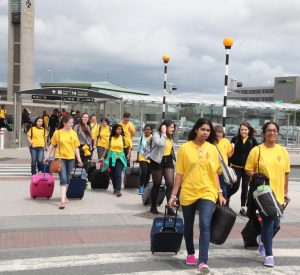 Delegates from over 187 different countries are attending this week’s event, which returns to St John Paul II’s homeland for the second time.

The Archbishop also expressed the hope that young Irish pilgrims would use their experience to learn about mercy and tolerance towards others.

“Mercy is about everyday life and reaching out and trying to understand and support other people who are less fortunate,” he said.

He also hoped that the young pilgrims would come back strengthened in their faith, closer to the life of the Church and that they would also learn “what it is to be a Christian living in a complicated world”.

“Bring your faith into the realities of day to day life so that you will be able to witness to your Christian values and to change the society that we live in.”

A total of ten Irish bishops are also participating in the religious jamboree. Pope Francis will arrive in Krakow on Thursday via an environmentally friendly tram.

He will also meet 10 survivors of Auschwitz on Friday. Most of the pilgrims participating in the week will also visit the former Nazi concentration camp.

One Irish pilgrim, 17-year-old Jonathan Boylan who is travelling with a group from St Mary’s College in Rathmines, told the Irish Independent he was particularly interested in visiting Auschwitz as he had been a student of the Jewish Stratford College at primary level.

“Obviously it won’t be enjoyable but it will certainly be interesting to learn about the history,” he said.

The highpoint of World Youth Day will be an open-air Mass on Sunday celebrated by Pope Francis in Brzegi area of Wieliczka, on the outskirts of Krakow.

The last World Youth Day in Poland took place in 1991 in Czestochowa and up to 1.5 million young people took part.

Aleksandra Jajko (18) is originally from Krakow but has lived in Ireland since 2005. She is acting as a leader for a group of Dublin pilgrims and remembers seeing the late Pope John Paul II in Krakow when she was just six years old.

Separately on Monday, some 50 pilgrims, led by Bishop Brendan Leahy, as part of a Limerick Diocesan group departed Shannon Airport for the week long celebrations and will be joined in Krakow by 35 members of the Polish community in Limerick and by a group of young people who are travelling to Krakow with the Franciscan Friars of Renewal based in Moyross.

Bishop Leahy is one of 250 bishops across the world and three Irish bishops/archbishops selected to address the celebrations, with three talks on themes of mercy to be given on Wednesday, Thursday and Friday of this week. 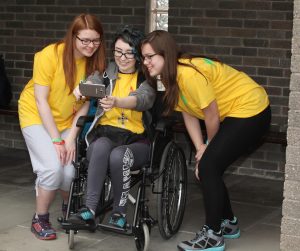 Speaking at Shannon Airport ahead of departure this morning, he said, “I am delighted and honoured to have been asked to give these talks. It is a chance to have a conversation with young people about this theme – what it means for our world today with so much terrorism and fear, for our own relationships with others, for the life of the Church, for spirituality, for the living out of Christianity in our everyday lives.”

“World Youth Day is an amazing experience and really has to be seen to be believed. I myself was at the very first World Youth Day in 1984 with John Paul and it was a really memorable event.”

“I can remember the sea of white hats that everyone wore. World Youth Day is the best of celebrations and such a reinvigorating experience as you get to witness young from across the world joining in absolute harmony.”

“In the troubled world we live in today, this is a very reassuring experience and strong message,” he said.

The week concludes with a long pilgrimage walk on Saturday to a designated site where all the pilgrims spend the night sleeping out under the stars and ahead of the Pope celebrating the closing Mass on Sunday.

Bishop Leahy said that this year’s gathering will be particularly special given it returns to the homeland of Pope John Paul II, who initiated World Youth Day.

“We are really excited about what’s ahead.  It is a massive outpouring of faith and love and this year will be very much inspired by Pope Francis’ dedication to Mercy in this Jubilee Year.”

Also leading the pilgrimage is Fr Chris O’Donnell, Diocesan Youth Director and he spoke of the great sense of hope and excitement ahead of the departure.

“Attending the World Youth Day celebrations is one of the most exciting things any of us will ever do. It’s an amazing event, with such an incredible sense of celebration of faith and mercy. There is also a huge sense of camaraderie and fun and we are all looking forward to this pilgrimage immensely.”

“The highpoint of the festival is the presence of the Pope and Pope Francis has engaged so many people that the young pilgrims who are traveling from Limerick this morning are really looking forward to seeing him, albeit amongst a crowd of a million and a half young people.”

“The 50 Limerick diocesan delegates come from all over the diocese and have been busy preparing for the event over recent months and I want to thank them for their commitment and, indeed, the many, many others who have worked so hard in helping us arrange all of this. The Limerick flag will be flying high and here’s hoping that it will be an experience we will never forget.”