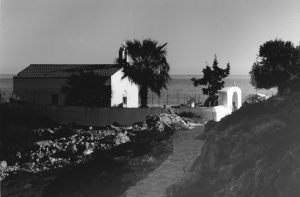 An exhibition currently running at the Irish Architectural Archive in Dublin provides an unusual take on the sacred places of the Greek island of Crete.

‘Memorialising the Sacred’ is an art installation which incorporates black and white photographs; sound recordings; and related objects, some of which have been lent by the Classical Museum in UCD.

It focuses on the churches and wayside shrines of the villages of Loutro and Anopoli in Sfakia in south-west Crete.

The earliest references to Christians in Crete is found in Acts 2:1-41 which recounts how Cretan Jews were among those in Jerusalem who were converted to Christianity at Pentecost.

Acts 27:11-22 relates how after he had completed three missionary journeys, Paul stopped briefly in Crete while being taken as a prisoner to Rome. It was from Crete that his shipwreck voyage occurred.

Evidence of a Christian community on the island itself is found in Paul’s letter to Titus, Titus having been left on the island around 57AD to organise the church and appoint elders.

The letter warns of false teachings which could undermine the fledgling church and gives instructions about who to appoint as elders.

Exhibition curators Anthony Kelly, Seán McCrum, Paddy Sammon and David Stalling have said they aim to reflect on the way these sites form a network of “active memorialising”, enhancing the local inhabitants’ sense of place and identity.

They also believe Ireland should be looked at in a similar spirit. 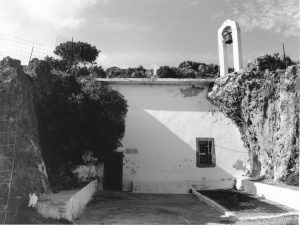 According to organisers, “The churches and shrines of Loutro and Anopolis, on the island of Crete, define their landscape, creating a very specific and complex network of buildings which, in turn, is a significant part of how local people define who they are and their relationship to where they are.”

“These buildings incorporate remembrance as active memorialising, as part of enriching present day existence. From the confines of a closely defined geographical area in Crete, the resonances are universal, particularly in an Irish context where for centuries sacred sites have been place-markers and place-makers.”

The exhibition seeks to explore, through photography, objects and sound, an aspect of a broad, shared, architectural inheritance.

The creative team behind the installation believe ‘Memorialising the Sacred’ reconfigures one form of reality, sacred places in Crete, in another equal reality, that of a gallery installation in Dublin.

The installation uses the Irish Architectural Archive’s Architecture Gallery space and ambiance as central to memorialising the sacred.

The sound which the installation incorporates draws on recordings made in and around the shrines and churches in Crete, sounds which are a part of the essential experience of these places.

Memorialising the Sacred will run in the Architecture Gallery of the Irish Architectural Archive, 45 Merrion Square, Dublin until Thursday 29 March 2018. Admission free.