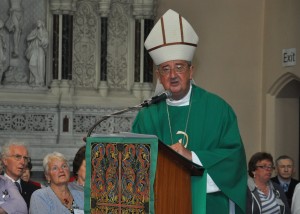 Archbishop Diarmuid Martin addresses Pioneers at the closing Mass in All Hallows College for a two-day international conference on addiction. Pic: Dermot Fagan.

Ireland’s pervasive culture of drink must be “confronted and challenged”, Archbishop Diarmuid Martin of Dublin has said as he called on sporting bodies to seek alternative sources of sponsorship to the drinks industry.

The leader of the Church in Dublin urged Irish society to address “the commercialisation of drink” and even the way “people talk about drinking – almost as if to normalise it.”

Speaking a few days after Arthur’s Day, he said Irish society had to look at how the commercialisation of drink could lead those “who are weak and vulnerable in the wrong direction into the entrapment of addiction. This is not a good thing for society,” he warned.

Asked whether Arthur’s Day should be scrapped, he told CatholicIreland.net he didn’t really know what it was.

“I don’t go to pubs,” he explained. “Certainly there are indications that the results from such occasion are not always happy ones. There is a clear increase in the amount of drink that is taken on those days and the problems that comes from that. So, by your fruits you’ll judge them,” he commented.

Speaking after a Mass in All Hallows College in Dublin to close a two-day international conference on addiction hosted by the Pioneer Total Abstinence Association, the Archbishop also urged the Government to do more to support addiction treatment programmes which he described as “vital”.

“Addiction treatment programmes are vital in today’s society and the Government should be looking at this. The trouble is the Government can’t do everything. We should also be encouraging much more involvement of society in this.”

He said there were “extraordinary examples” of treatment programmes that were run by voluntary organisations and these needed support.

One of these is run by Fr Peter McVerry who told the 200 delegates attending the conference, ‘The Spirit that sets us Free’ that of the €3 million needed to run his three addiction treatment programmes and drug prevention programmes just €190,000 was grant aided from the state. The rest had to be fundraised by the charity.

“I think that reflects the low priority that drug issues have in our society and with the Government,” he said.

“We have probably 20,000 heroin users in Ireland today and we have just 28 beds in detox treatment programmes – that is a disgrace,” Fr McVerry said.

He said this was very short sighted because every young person that could be weaned off drugs and supported to stay off drugs was one more person who would not be a cost to the health or social services and would not be involved in petty crimes such as burglaries.

“Every single person who comes off drugs is an enormous benefit to society. I think we should be funding drugs services to a far greater extent than we are,” he said.

He also highlighted that the objectives set in the mid term review of the last drugs strategy had failed.

“One of the recommendations was that people would be able to access treatment within 4 weeks of going to look for it. Now, in some parts of the country there is a three year waiting list. So that was never implemented.”

Separately, Pioneer spiritual director, Fr Barney McGuckian expressed himself delighted with the fact that the first letter from Pope Francis to an Irish based organisation congratulated the Pioneers on their 115th anniversary. 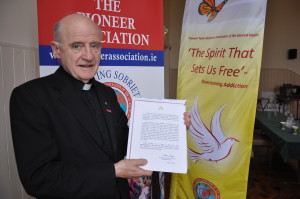 Fr Barney McGuckian, SJ with the letter to the Pioneers from Pope Francis.

In his letter, Pope Francis described the work of the Pioneers as inspiring and paid tribute to the foundation of the organisation in 1898 “through which countless people have been assisted in living full lives without dependence on alcohol or drugs.”

He gave his apostolic blessing to the Pioneer members and their work.

Other speakers who addressed the conference included Fr James Harbaugh, SJ, who spoke about the ‘Role of Faith and Spirituality in Addiction’.

He himself has been thirty years sober after a struggle stemming from his father’s alcohol addiction.

Majella Coyle, an addiction counsellor in White Oaks Rehabilitation Centre spoke about her own difficult journey with addiction and her sister, journalist and broadcaster, Pat Coyle, addressed the difficulties for the family members of someone with an addiction.

The conference also heard from a young Pioneer, Patricia Gallagher.

Speaking to CatholicIreland.net, Fr Peter McVerry said he would be “very supportive of total abstinence.”

“I don’t drink and the reason I don’t drink is because I have seen so much harm caused by alcohol. I don’t want my drinking to give the impression to anybody that they should also be drinking or that there is no danger.”