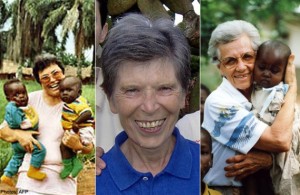 A former superior of the Xaverian missionary sisters in Burundi has said the order does not believe the police version of what happened to their three elderly Sisters who murdered there nearly a week ago.

Sr Delia Guadagnini told the Fides news agency, “We do not believe in the police’s version” and she voiced dissatisfaction with police investigation.

Last Wednesday, the police announced that they had arrested a man who, they said, had confessed to the killings.

The suspect reportedly was found carrying the cell phone of one of the murder victims and keys to the convent in which the crime took place.

Police claim Christian Claude Butoyi (33) killed the three religious because he believed that their convent was built on land that belonged to his family.

However, Sr Delia Guadagnini told Fides, “We do not think that this horrible crime was committed by a single person” and she hinted that the police had too quickly found a suspect as “an excuse to divert the investigation.”

Sr Guadagnini, former Regional Superior of the Xaverian Missionaries in the Democratic Republic of Congo and Burundi, knew the three nuns, Sr Lucia Pulici, Sr Olga Raschietti and Sr Bernadetta Boggian very well. Despite everything that has happened, she said, “We will continue with our mission.”

The three Xaverian missionaries were savagely killed on Sunday 7 September in the mission of Kamenge, a district in the North of Bujumbura, capital of Burundi.

Originally police said the killings probably occurred during a botched robbery. But that now seems unlikely as nothing of value was taken from the convent.

The ferocity of the attacks—described by a local leader as “savage”—also suggests a different motive.

According to Sr Guadagnini, members of the religious order felt comforted at the funeral of their Sisters by the presence of a vast number of people, from the simplest to the authorities.

She told Fides, “I am going to take the place left by the nuns killed.”

On Tuesday, the Xaverian order denied reports the three nuns were raped.

One of the elderly nuns, who were working as missionaries, was decapitated in attacks.

Two of the three nuns were found with their throats slit, an anonymous police official said, while Kamenge Mayor Damien Baseka described the murders as “savage”.

The bodies of Sr Pulici and Sr Raschietti were found on Sunday afternoon, leading to initial reports that only two nuns had been killed.

However, Sr Boggian’s body was found several hours later. It is believed that Sr Boggian discovered her two slain colleagues, alerted police and church officials, and several hours later was herself murdered and beheaded by an attacker who apparently had remained hidden in the convent after the initial killings.

Pope Francis said he was “deeply saddened” by the murders and sent a message of condolence to the nuns’ order as well as their families and friends.

The Pontiff said he hoped the “bloodshed becomes the seed of hope for building authentic brotherhood between peoples.”

Italian Prime Minister Matteo Renzi described the killings as “an atrocity that leaves one dismayed at the savagery” while Italian Foreign Minister Federica Mogherini expressed condolences and said the killings brought “great pain”.

Vatican Radio said the three nuns had been working among the sick and poor for seven years in Burundi, a predominantly Catholic country described as one of the five poorest countries in the world.

Previously, they had been missionaries in the Democratic Republic of Congo.