In an extraordinary move, taken on account of the COVID-19 pandemic, Pope Francis has decided to extend the 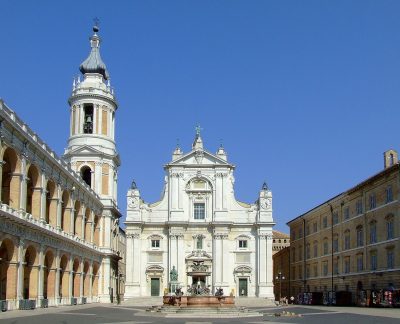 The Basilica della Santa Casa di Loreto where the jubilee year has been extended for another 12 months. (Pic. Wikicommons).

Laurentan Jubilee for another 12 months, until Friday 10 December 2021.

Last year, the Pope decreed that the Feast of the Blessed Virgin Mary of Loreto would be added to the Roman Calendar, for the first time, to coincide with the start of the Holy Year of the Laurentan Jubilee at the Basilica della Santa Casa (the Basilica of the Blessed Home).

The start of the jubilee coincided with the centenary of Our Lady of Loreto being declared Patroness of Airmen, air passengers and safe travel, by Pope Benedict XV. That 1920s avionic appellation stems from the belief that the basilica enshrines the house where Our Lady in Nazareth and that it came to this hilltop location, on Italy’s eastern coast, as a result of angels carrying it, by air, across the Mediterranean and the Adriatic Seas

The Jubilee Year was officially inaugurated on last year’s Feast of the Immaculate Conception, when the Holy Door was opened by Vatican Secretary of State Cardinal Pietro Parolin, but once COVID-19 reached Italy at the end of January events and celebrations were severely curtailed because of efforts to limit the spread of coronavirus.

Announcing the extension of the jubilee to loud applause by those present in the basilica last weekend, Archbishop Fabio Dal Cin, Pontifical Delegate to the Shrine of Loreto said: “In this difficult time for mankind, Holy Mother Church gives us another twelve months to start anew with Christ, letting us be accompanied by Mary, a sign of consolation and sure hope for all.”

The apostolic decree allowing for the jubilee extension is co-signed by the Penitentiary Major and the Regent of the Apostolic Penitentiary, Cardinal Mauro Piacenza and Fr Krzysztof Józef Nykiel, and it states that ‘the faithful will draw from the generous extension good intentions and spiritual vigor to be implemented in life according to the law of the Gospel’.

Archbishop Dal Cin says that Pope Francis has expressed a particular closeness to the shrine this year. Not only is the Feast Day of Our Lady of Loreto now part of the Roman Calendar, the Pope has added three new invocations for Our Lady to the Laurentan Litanies: ‘Mater Misericordiae’ (Mother of Mercy), ‘Mater Spei’ (Mother of Hope) and ‘Solacium migrantium’ (Help of Migrants).

In Ireland, the name Loreto is synonymous with the Institute of the Blessed Virgin Mary (IBVM), a religious congregation whose members are commonly known as Loreto Sisters and who have played a major role in providing girls secondary school education in Ireland.

Founded in 1609 by Yorkshire woman Mary Ward, the congregation has been active in Ireland since 1821. Today, while the order is still primarily associated with schools, Loreto Sisters also work as hospital and prison chaplains, counsellors, youth workers and ministers of retreats and guided prayer.