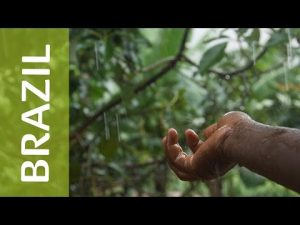 With all eyes on Brazil this summer for the Olympic and Paralympic Games, Catholic development agency CAFOD says the plight of Brazil’s indigenous peoples and the Amazon should be centre stage.

“Indigenous peoples are being murdered, criminalised, threatened, evicted from their land, and their rights to health and education are systematically violated,” said CAFOD’s Brazil Programme Officer, Esther Gillingham.

“Instead of prioritising protection of indigenous people as the guardians of the lungs of our planet in the Amazon rainforest, Brazil’s interim government is implementing austerity measures, cuts to public policies, and constitutional amendments that aim to boost economic growth while destroying indigenous lands and livelihoods.”

However, the UN has highlighted that indigenous peoples in Brazil face risks to their lives that are “more profound than at any time since the adoption of the Constitution in 1988”.

Ana Paula Caldeira Souto Maior, a lawyer for CAFOD’s partner, ISA (Socio-Environmental Institute) who has been working with indigenous peoples in Brazil for 30 years said, “The environment that Brazil’s Yanomami and Ye’kuana indigenous people are living in is under threat from small-scale illegal gold mining and the impacts of climate change.”

“In March of this year they experienced the worst droughts and fires for 20 years, linked to El Niño.”

“FUNAI – the Indigenous Agency that serves to protect Brazil’s indigenous peoples’ rights and lands – has seen its budget slashed by 33%.”

“The Yanomami indigenous people, who protect the Amazon rainforest in Brazil’s largest indigenous territory, are facing a health crisis, and governmental agencies are failing to protect them from illegal invaders and guarantee their constitutional rights,” said Ana Paula Caldeira Souto Maior.

Indigenous people in Brazil are some of the most vulnerable and threatened in the country.

The majority live in the Amazon basin and have a deep-rooted spiritual connection with nature.

“Brazil is experiencing its worst political and economic crisis in decades, with 25.8 million Brazilians living in poverty,” said Esther.

“Whilst roughly £3.8bn of taxpayers’ money is being spent on the Games, this money could be used to fund key social areas, such as health, education and indigenous rights which are facing unprecedented cuts.”

“When the lights go out at the closing ceremony in Rio, we must continue to shine a light on Brazil’s indigenous movement to protect their lives, rights and lands,” she added.