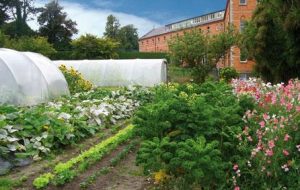 An Tairseach, the Dominican convent-turned-ecology centre and farm in Co Wicklow, is hoping more members of the laity will participate in this year’s programme of retreats which will explore issues highlighted by Pope Francis in his encyclical Laudato Si.

However, according to Sr Colette Kane OP, director of the centre, those interested will need to book soon, as all the retreats are already half full.

An Tairseach is located on 70 acres of land close to Wicklow Jail in Wicklow town. The Dominican Sisters, who established a convent here in 1870, practise sustainable living, provide environmental education and explore creation spirituality.

Since 1998, the soil, land and farm have been restored. The farm is now a fully certified organic farm, with a vegetable garden and includes a small suckler herd, a few pigs and two ponies.

The vegetables and meat produced are sold at markets in Kilruddery, Bray and St Andrew’s Market in Dublin’s Pearse Street, as well as at the farm shop at An Tairseach.

In addition to these activities, the ecology and spirituality centre hosts one-day conferences, mini courses, retreats and weekend courses which deal with issues on cosmology and the universe.

The first of this year’s bi-annual 10-week residential programmes begins on 5 March and runs until 12 May 2017.

Another follows from 3 September until 10 November 2017. They will both focus on exploring spirituality in the context of an expanding universe, an endangered earth and the Christian tradition.

Separately, Dominican Sr Sharon Zayac will guide a retreat from 5–10 June titled ‘The Universe Story: Promise and Hope’. According to Sr Colette Kane, the retreat will help participants contemplate what the Universe is teaching about incarnation, salvation and resurrection and it is open to anyone.

Asked what she thought participants might learn from the retreat, she told CatholicIreland.net, “In Laudato Si, the Pope calls for dialogue between science and religion. The retreat is coming out of lived experience and wrestling with those big theological questions – the purpose and the meaning of life, and how can we make sense of today’s world, given the discoveries of science, such as an expanding universe.”

A month later, another retreat presented by Anne and Terry Symens-Bucher and Deirdre Ní Chinneide will explore the Christian response to the suffering in the world caused by the unravelling of ecological, economic, political and social systems.

The Dominicans explain their mission at An Tairseach as growing in “awareness that the Earth is our home and home to all living beings. By farming without chemicals we choose to make a contribution to protecting human health and to restoring the diversity, integrity and beauty of the eco-system which is our farm. We will use this Farm and Ecology Centre as a resource for education in how to live sustainably, delighting in the beauty and diversity of the natural world.”

The Mission of An Tairseach is to raise awareness of the place of the human as part of the web of life, through practice and education. An Tairseach is a community which values: truth and fairness in its relationships; respect for the whole community of life; graciousness to all who come and beauty in all its dimensions.

An Tairseach is in the process of preserving and enhancing a variety of habitats at its farm.

These include ten acres, three of which are wetland set aside as a sanctuary for wildlife so as to restore habitats and increase diversity.

Over the past few years, 8,000 mainly broad-leaved trees have been planted. A wetland bordered by a stream is being preserved, and a pond was established in 2001. Small areas of wild flower meadows are also incorporated into the farm.

Hedgerows, which are very important as cover and corridors for many species of wildlife, are being improved, and field margins and headlands are left to grow wild. These are useful sites for nesting game birds and over-wintering beneficial insects.

A number of nature trails and walkways have also been established and guided tours focusing on the organic farm or on different aspects of the environment are offered once a month.

For more information on Dominican Farm and Ecology Centre: http://www.ecocentrewicklow.ie/