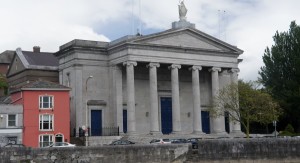 One of Cork city’s most iconic Catholic churches is to hold an open day this Sunday to allow the public view the restoration work which it is currently undergoing.

Fr Gerard Dunne OP, the prior of the Dominican community in Cork, will host the event at St Mary’s Church on Pope’s Quay to give people an opportunity to view progress on the restoration of the building, and to see the full extent of what remains to be done.

The Dominican foundation is this year celebrating the 175th anniversary of its establishment in Cork.

The striking church and its neighbouring priory building, both of which are some 200 years old, are in dire need of restorative repair and reconstruction.

According to Fr Dunne, “The Friends of St Mary’s Restoration Committee have been spearheading a massive fundraising drive since last November to raise funds for urgent restorative repairs and dry-coursing required in both the church and priory buildings.”

Both are badly affected by the ingress of water through leaks in the roofs, walls, and windows. Damp seepage through the walls of the buildings have made the problems worse.

“Initial engineering assessments have estimated the full cost of repair and restoration works at close to €500,000,” he explained. 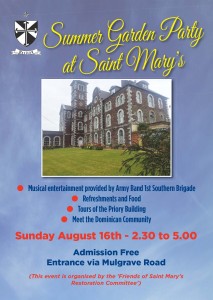 Fr Dunne has now decided to host this open day to raise more awareness of the entire project.

The event takes place on Sunday from 2.30 to 5pm, with afternoon tea and finger food available in the priory garden, and entertainment provided by the Band of the 1st Brigade based at Collins Barracks, Cork.

Visitors will also be briefed on the renovation and restoration project.

The Dominicans can trace their roots in Cork back to 1229, when they built a church on an island in the south channel of the River Lee, just outside the ancient city walls.

By 1729, the friars were living off Shandon Street, where they built a chapel known as Sand Quay Chapel, where Venerable Nano Nagle worshipped.

In 1784, the Dominicans built a priory and church on the site on which the historic Shandon Castle stood.

It was their home for 50 years until they moved to Pope’s Quay.

The foundation stone of the present-day church was laid in 1832. It opened in 1839. Entrance to Sunday’s event, which is free of charge, is through the entrance off Mulgrave Road.