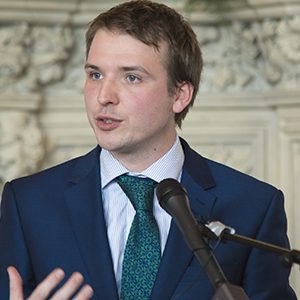 Director of the Pope Benedict XVI Centre in London and Professor of Theology and the Sociology of Religion at St Mary’s University, Twickenham, Prof Stephen Bullivant, has been awarded a visiting research fellowship at Blackfriars Hall, University of Oxford.

Blackfriars, founded by the Dominican Order, is one of Oxford University’s three Catholic Permanent Private Halls. An article on the St Mary’s University website states that Professor Bullivant’s appointment will span Oxford’s Hilary and Trinity terms, from January to July 2017.

During this time, Professor Bullivant will advance a number of research projects. These include a statistical survey of the British ‘nonreligious’ population and an exploration of moral and social attitudes among Catholics in South Africa.

He will also continue work on a new book, which has the provisional title Mass Exodus: Catholic Disaffiliation since Vatican II.

Professor Bullivant will still be based at St Mary’s, but will visit Blackfriars regularly. He will also present some of his research at a seminar in Oxford next summer.

Professor Bullivant is an award-winning scholar with a wide range of interests, including the social-scientific study of religion and atheism/secularity. His books include The Trinity: How Not to Be a Heretic, Faith and Unbelief, and The Salvation of Atheists and Catholic Dogmatic Theology. He has also co-edited a number of books, including The Oxford Handbook of Atheism.

Speaking about his appointment, Professor Bullivant is quoted on the St Mary’s website as saying: “I have a long, informal association with Blackfriars, dating back to visiting while an undergraduate elsewhere at the University of Oxford. Indeed, the people, liturgies, and ideas I encountered there are a large part of why and how I ended up as both a Catholic and a theologian. I still have many friends at Blackfriars, including some St Mary’s alumni, so I feel immensely grateful and honoured to have this opportunity to reconnect, on a more formal footing, with Blackfriars and its remarkable academic community.”

St Mary’s University officially opened the Benedict XVI Centre for Religion and Society on 5 May. Speaking at the time, Professor Bullivant said the centre would “bring the riches of the Catholic tradition of Catholic social thought, the riches of Catholic teaching on faith and reason, into the national conversation.” The centre is described on its webpage as “an international hub for research and engagement activities in the area of religion and the social sciences (primarily economics, sociology, and political science)” and brings together the various aspects of research on the university campus “while fostering new projects in collaboration with external partners, both individual and institutional.”