Home > News > Dioceses set for 24 hours for the Lord

Dioceses set for 24 hours for the Lord 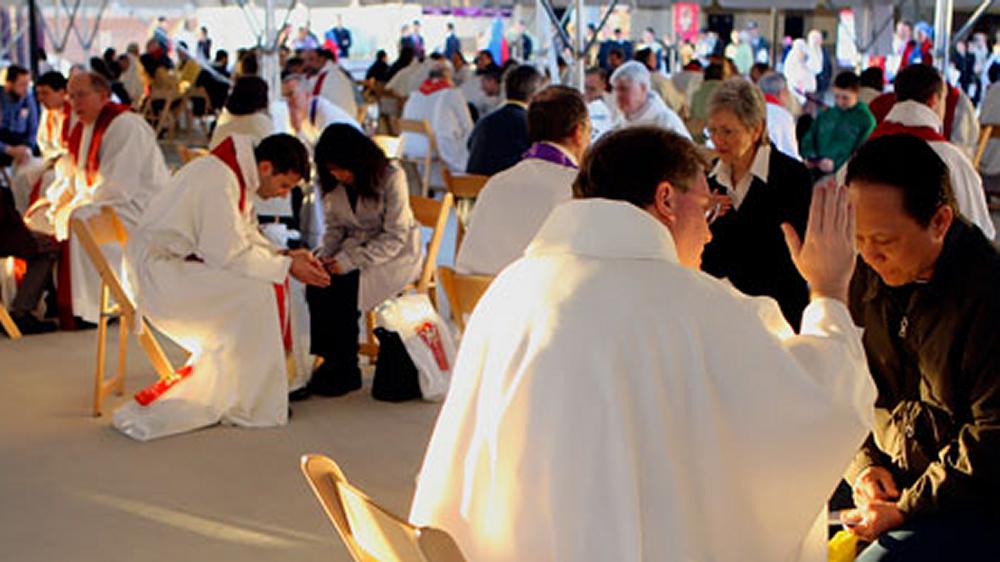 Dioceses around Ireland are making preparations to host the ’24 Hours for the Lord’ initiative called for by Pope Francis.

Kildare and Leighlin, Cork and Ross, and Kerry are among the dioceses that have nominated parishes to celebrate the 24 hours of exposition of the Blessed Sacrament and confessions.

The Pontifical Council for Promoting the New Evangelisation wrote to dioceses across the world about the initiative in February.

The Pope suggested that 29-30 March should be the days on which ’24 Hours for the Lord’ were held and that during this time people would be able to find special opportunities for prayer and the sacrament of confession.

In the Vatican, it will begin with a liturgical celebration in the Basilica of St Peter’s on Friday afternoon, then in the evening and night some churches in the centre of Rome will be open for prayer and confessions.

The Pope himself will also spend some time hearing confessions.

“It will be – we could call it – a celebration of forgiveness, which will happen also in many dioceses and parishes of the world,” the Pope said.

He explained that “the forgiveness that the Lord gives us” should make us “celebrate like the father in the parable of the prodigal son, who when the son returned home, had a party, forgetting all his sins.”

In the Diocese of Cork and Ross continuous confessions will be held from Friday to Saturday evening at St Francis Church in Liberty Street.

Priests from many religious orders and the Diocese will be available throughout the day and night to hear confessions there. It is a city church associated with confession.

Speaking about the sacrament of reconciliation, Bishop John Buckley said, “confession of one’s sins and a return to the Gospel has always been an important part of the Church’s Lenten observance.”

He commended this initiative wholeheartedly and said he will hear confessions himself in St Francis’.

In the Diocese of Kildare and Leighlin, Bagenalstown parish has undertaken to host the prayer event at St Andrew’s Church.

The Church of the Resurrection in Killarney will have at least one priest available for confessions at all times during the 24 hours.

Priests of the Diocese of Rome, led by Pope Francis, will offer Eucharistic adoration and the sacrament of penance in St Peter’s Basilica and three other Roman churches.

The hope is that the action will be replicated all over the world, and that at least one church in every diocese will remain open for the full 24 hours to offer the sacrament of reconciliation to those who wish to celebrate it, preferably alongside Eucharistic adoration.

In Rome, the initiative will begin in St Peter’s at 5pm when the Pope will lead a penitential service and hear confessions.

At 8pm, the Basilica of Santa Maria in Trastevere, the Church of St Agnes in Piazza Navona and the Church of the Holy Stigmata near Largo Argentina will be open for confessions and adoration into the night.

The plan is for the 24 hours to continue until 4pm on Saturday 29 March, concluding at 5pm with the celebration of First Vespers of Dominica in Laetare in the Church of Santo Spirito in Sassia, the Roman Sanctuary of Divine Mercy.

The Pontifical Council for Promoting the New Evangelisation has stressed that ’24 Hours for the Lord’ is for the whole Catholic Church and one of its main aims is to create a powerful tradition.

Its plan is that the event will be celebrated on or around the Fourth Sunday in Lent in the future.