The Church needs new ways of reaching out to people and to involve them actively in Christian life, said Archbishop Diarmuid Martin of Dublin in this year’s St Kilian’s Day lecture in Wurtzburg, Germany. 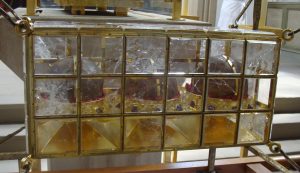 Wurtzburg Cathedral is built on the spot where the 7th century Irish missionary, ‘the Apostle of Franconia’, and his two colleagues Ss Colmán and Totnan, were martyred.

Every year on St Kilian’s Day, a reliquary containing the heads of the three saints is taken from the Cathedral crypt and paraded through the streets of Wurtzburg, which sits on the banks of the River Main.

In his lecture, Archbishop Martin said that many of the changes taking place in the Irish Church are similar to those affecting the German Church, but “the Irish situation has its own peculiarities and differences and paradoxes”.

After giving an account of the rise and fall of religious observance in Ireland and an account of church-state relations post national independence, the Archbishop told the German audience that separation of Church and State in this country was not a hostile one, “but it could turn into one and there is a growing number of vocal supporters of a much more hostile relationship.

“Alongside hostility to the Church, one can identify more integralist elements within the Church who see a Christian presence in a pluralist culture purely in terms of a negative culture war,” said Dr Martin.

The Archbishop believes that the process of secularisation started decades earlier than most people realise; indeed, as a seminarian in the mid-1960s he attended a sociology lecture that began with the claim that Catholicism was a minority culture in Ireland, such was the impact of British media on everyday Irish society already at that time.

He added: “Ireland is today undergoing a further phase of revolution of its religious culture. Many outside of Ireland are surprised to discover that there are parishes in Dublin where the presence at Sunday Mass is some 5 per cent of the Catholic population and, in some cases, even below 2 per cent. On any particular Sunday about 18 per cent of the Catholic population in the Archdiocese of Dublin attends Mass. Statistics about Mass attendance most significantly do not examine the age of those attending.

“The national census, which was carried out just over a year ago, showed a very large percentage of the population ticking ‘the Catholic box’, but that percentage hides the range of difference about what ‘Catholic’ may mean even within an individual family and among generations.

While Ireland remains a predominantly Catholic country, the percentage of the population who identified as Catholic has fallen sharply from 84.2 per cent in 2011 to 78.3 per cent in 2016.

Significantly, the number of those who registered as having ‘no religion’ grew by 73.6 per cent, representing almost 10 per cent of the population. The census showed that Catholicism was the largest religion, followed now by ‘no religion’, then Anglicanism and in fourth place Islam.

“The precise makeup of the grouping who registered as no religion is hard to break down. A substantial portion belonged to immigrant communities, but the most striking factor is the fact that the ‘no religion’ category was highest in the age group 20 to 39, the group with children entering school life and the group naturally most active in the formation of political culture for the future. The age group 20–39 accounts for 28 per cent of the general population but 45 per cent of those with no religion fall into this age bracket.”

Quoting a Northern Irish Protestant friend, the Archbishop said the Catholic Church in Ireland needs to move “from monuments to movements”. He said “The Catholic Church both in Ireland and in Germany has to avoid wasting time and resources in keeping in place and maintaining monuments physical, structural, institutional and financial.

“The Irish Church in the future must be a much more monument-less one, but rather one which reaches out into hearts and becomes heart-driven through the conviction of those who feel touched and inspired by the message and teaching of Jesus Christ.

“Faith is not about establishment. It is about taking the risk of abandoning one’s own security in order to be like the God who did not cling to the trappings of power and authority, but who gave himself totally for our sakes. This is a message which is difficult to comprehend and realise especially by those of us who have a leadership role in the Church and who are open to the perennial temptations to defend and even to abuse the power which was given into our hands to be servants.

“We celebrate Saint Kilian, one of the great missionary monks who spread the good news right across the continent. In its earliest days the Irish Church was fundamentally monastic. Bishops were hired by Abbots to carry out sacramental ministry. While I am not advocating a return to such practice, it is important for us to remember that hierarchy is only one pillar in the nature of the Church.

“The Church has to become less narrowly institutional and allow other forms of charismatic presence to animate the Church. Many of the attempts to address the question of the drop in the numbers of priest are still priest-centred, rather than focussing on the role of the wider believing community in different forms of leadership. This of course cannot be inspired by trying to replace priests through laymen and lay women becoming substitute priests. It requires new ways of ensuring that every member of the Church becomes a missionary disciple of Jesus.”

The full text of Archbishop Martin’s lecture is available at: http://www.dublindiocese.ie/the-challenge-for-the-church-in-the-21st-century/.