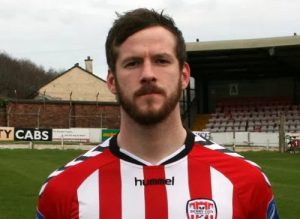 Addressing the packed congregation at St Columba’s Church, Long Tower, Fr Mullan said that people thought of Ryan as an athlete who “would put his head where other players would not put their boot. He was brave and knew no fear. As captain he was an inspirational leader in the dressing room and on the field of play.”

His quick reflexes, heady play and competitive spirit made him a great role model for many young boys and girls. We are grateful for Ryan’s powerful example, he said.

But there was also a “primary chapter” in Ryan’s story as “a child of God. What of it?” he asked. From his family, Fr Mullan had learned that Ryan’s character was “forged by the generations of his family and his own love as he expressed and lived out his life in spirit and in truth”.

For his family, his unexpected death was an appalling shock prompting anguished questions. “Why did it have to happen? Could any of us have done anything? Could his death have been prevented? We feel in some way betrayed by God,” continued Fr Mullan, “God whom we have learned from childhood to call our Father.”

Fr Mullan reminded the grieving congregation that Jesus himself was forced to cry out “My God, My God, why have you abandoned me?” This cry was “part of the story of life, and of faith itself,” he said.

“God asks us to believe Him and to trust Him, even in the face of anguish and loss. God does not send these crosses which pin us to the ground. They come to us and they came to God’s own Son from the conditions of life in the world and they come across to us unbidden and unwanted as occasions for deep and anguished faith.

God does not explain why these demands are made of us, and even if he did, we would not be able to understand. Such answers belong to Eternity, at the end of time, when God will wipe away all tears.”

President Michael D. Higgins, the Chief Executive of the Football Association of Ireland John Delaney, and players and managers from across Ireland attended the huge funeral which was celebrated by the Bishop of Derry, Donal McKeown, and a number of priests from across the diocese.

Derry City FC players as well as the women’s team and youth teams formed a guard of honour outside the church.