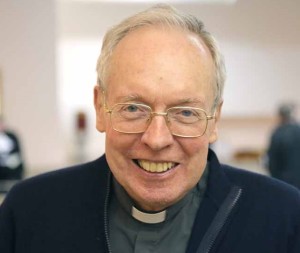 The death has occurred of the well-known Jesuit theologian and educator, Fr Michael Paul Gallagher.

The former Professor of Fundamental Theology at the Gregorian University in Rome was a highly regarded writer and his books include ‘Clashing Symbols’ and ‘Free to Believe’ (DLT).

Fr Gallagher also lectured in UCD as well as the Collegio Bellarmino in Rome.

He died on Friday after a short illness and his funeral will take place on Tuesday in Milltown. Prayers will be held in the chapel in Milltown at 4pm on Monday.

Born in Colooney, Co Sligo, he was educated at Clongowes Wood College in Co Kildare.

Following his novitiate, the young Jesuit did special studies in Renaissance literature at Oxford, and wrote his thesis on rhetoric in the poetry of George Herbert.

Among his many students, he taught the Irish film directors Neil Jordan and Jim Sheridan.

While living in Paraguay, he realised that “Living with the poor, I saw that unbelief was more likely a product of life-style, than a set of ideas.”

On his return from Paraguay he lived and ministered in Ballymun while commuting to UCD to lecture.

Separately, Archbishop Diarmuid Martin on Saturday celebrated the life and ministry of 17 priests of the archdiocese of Dublin who died over the past year.

In his homily at St Mary’s Pro Cathedral, the Archbishop said that priests can never treat death as routine or become immune to the reality of death and what it signifies for those who are close to the one who dies.

He said the ministry of a priest brings each of them into unique contact with the realities of life and death.

Priests assist not simply at funerals, but they accompany men and women in their final moments of physical weakness and into death itself.

They share in the sorrow of the bereaved and at times share in an anguish and even anger with God in asking the question of why: why a sudden death or the death of a young person or of a child or why the horror of a brutal and violent death.

He said each of the 17 priests they were commemorating would have ministered to the dying and to the bereaved, “yet that experience alone will not have removed from them the deep fear that we all experience as we face our own death.”

Archbishop Martin said that the scientific progress of the world in which we live and the genius and inventiveness of humans and of human science have brought great benefit to humankind and the relief of suffering.

But he noted that suffering will never be eliminated; “it is love alone that can bring even suffering to a different level and change and redeem what human life is about,” he said.

Of eternal life, he suggested that it was incorporation into the love of God.

“Our God is a God, however, who reaches out and loves, not a self-possessed judge. Heaven is a place where we experience God’s love in a new way and we enter into communion with that God.”

He added, “Each of us dies on our own. Death is the moment of supreme loneliness, if we are not aware of the fact that we are to be taken up into communion. For the believer, death and entry into life eternal mark the end of the loneliness and isolation and self-centeredness which are what brings grief into human life.”

The Archbishop said that if we understand that heaven is communion with God, then all our life in this world should be a witness to what the communion of humankind means: the believer in Jesus Christ must be one who is out there alongside all those who are trapped in loneliness and isolation, through sinfulness and narcissism, through being excluded from society, through doubt and anxiety and fear.

He concluded by praying for priests who are ill and for those who suffer and are troubled in their ministry as well as for those priests who have become “lax and disheartened and where the spark of ministry has been dimmed”.

“We pray for those priests who continue to give themselves day after day in ministry and through the way they live help us to understand that way we live here on earth must be one which will lead us along the path towards eternal life, the real path of human fulfilment.”