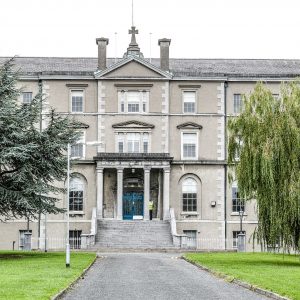 Tonight the curtain will close on Clonliffe College when, as part of Culture Night, Dubliners have their final chance to see what life was like in the archdiocesan seminary that trained nearly 3000 men for the priesthood.

Founded in 1859, Holy Cross College in Drumcondra primarily trained priests for the Dublin archdiocese, with 1250 of its students coming from the capital city or its surrounding county. However, the majority of students (1469) came from outside the diocese.

Indeed, over the course of its history, Clonliffe was alma mater to 76 foreign students who came from 11 different countries. Among its “old boys” is the current Archbishop of Dublin, Diarmuid Martin, who entered the college the week before the start of the Second Vatican Council in 1962 and was ordained by Archbishop John Charles McQuaid in 1969.

Tonight, from 6.30 p.m. onwards, visitors will be able to view a vast range of archival material on display, including previously unseen film footage, photographs and documents illustrating the many aspects of life as a student priest, from Bible studies, liturgy and canon law to sport and drama.

Also on exhibition will be a display of old vestments, artefacts, and paintings by Fr Jack Hanlon RHA, a renowned artist who exhibited in the United States and Europe. 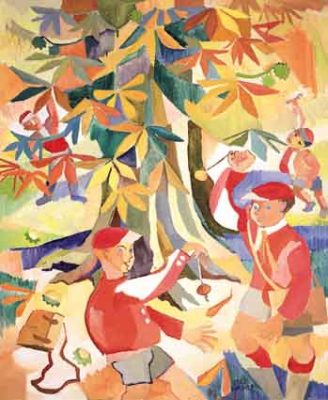 As well as religious art, Fr Jack Hanlon painted scenes from everyday life, such as this one, ‘Conkers’. (Pic: Whytes)

Before he became a revolutionary, former president Éamonn de Valera taught maths to Clonliffe students in 1905.

Holy Cross ceased to operate as a seminary in 1999 when its last four students left. Since then it has been the centre of administration for Ireland’s largest diocese and also a busy pastoral centre.

However, its links with the Church are coming to an end, following the sale of the college buildings and their grounds to the GAA earlier this year for a price of €95m.

As the final curtain falls on the college tonight, it will host a recital of classical and contemporary music by members of the National Children’s Choir and the Dublin Diocesan Music Group.

Other diocese-related Culture Night activities in Dublin include a celebration of faith-based music at St Paul’s Church on Arran Quay at 8 p.m. and choral evening prayer at 5 p.m. with the Palestrina Choir at St Mary’s Church, the pro-cathedral, on Marlborough Street.

For a full listing of Culture Night events across the country – and near you – visit www.culturenight.ie.