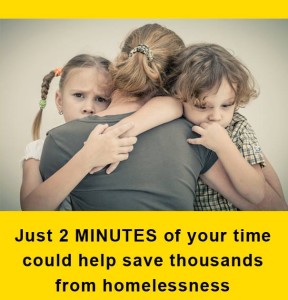 Seventy-one families became homeless in Dublin in April – the highest number on record.

Highlighting what it called “a new crisis point”, Focus Ireland warned that families are now at serious risk of ending up sleeping rough due to the lack of accommodation.

The charity explained that this figure does not even reflect the full scale of the problem.

Many families who have been assessed as homeless have not been accommodated because local authorities have run out of emergency accommodation.

The Focus Ireland Intake Team (which is run jointly with the Peter McVerry Trust) increasingly comes across families sleeping in cars or other inappropriate places.

The charity has now called for Minister Alan Kelly to issue an urgent ministerial directive to instruct local authorities that any family that is homeless “MUST” be provided with suitable emergency accommodation and that no homeless family should be turned away.

“Without this Ministerial order and the resources to make it effective, it is simply a matter of time before we start to see young children and their parents sleeping on our streets.”

“The risk that these children will be under is unthinkable in a country which, we are told, is in the middle of an economic recovery,” said Mike Allen, Advocacy Director, Focus Ireland.

The charity made it clear it was not criticising local authority staff who work are under extreme pressure.

“It is totally unacceptable that 71 families became homeless last month, and that countless more were turned away with no place to sleep. Focus Ireland has warned the Government time and time again that without urgent action to increase Rent Supplement levels to match real market rents the homeless and housing crisis will continue to deepen.”

“Sadly this is exactly what is happening in Dublin and this problem is now also rearing its head in cities including Cork and Galway,” Mike Allen stated.

Focus Ireland said that any solution must focus on keeping families in their existing homes to prevent them becoming homeless in the first place and stressed that an increase in rent supplement across the board is required to do this.

According to Mike Allen, “There are some prevention measures in place which have helped some families and it’s right to highlight these successes. Since June last year, the Government has intervened to save the tenancies of over 480 families by increasing rent supplement on a case by case level.”

“However, during the same period around the same number of families lost their homes due to government inaction on rents. This failure has resulted in more than 1,000 children being homeless with their families.”

Up to three years ago, family homelessness was rare in Ireland and mostly associated complex social problems. In the last three years, the charity has seen the problem escalate because families simply cannot afford to pay the escalating rents.

Focus Ireland supports families who are homeless in Dublin and works in co-operation with the DRHE (Dublin Regional Homeless Executive) and the Local Authorities to help families to move on from homelessness.

It highlighted the statistics which show that in April, of the 71 families referred to Focus Ireland by four Dublin authorities, 63 had never been homeless before.

Earlier in May, the homeless organisation welcomed a report which recommended that the Government introduce longer leases for tenants and tax relief for landlords as key strands of policy to improve tenant security and increase supply of rental properties.

While the charity welcomed the report as a medium to long-term approach to this sector, it warned that emergency action is also required to respond to the situation that households face today – more families and single people struggling to keep a roof over their heads as rents shot up by up to 20% over the last two years and there was a record shortage of properties available to rent.

Focus Ireland continues to campaign for rent supplement rates to be increased, to keep pace with rising rents and to stop people from being priced out of the rental market in many areas.