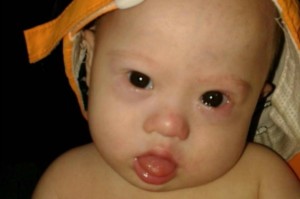 A campaign has begun in Australia to raise funds for Baby Gammy, a 6-month-old boy with Down’s Syndrome and congenital heart disease currently living in Thailand.

He was born to a 21-year-old Thai woman, Pattharamon Janbua, after Pattharamon entered into a commercial surrogacy arrangement with an Australian couple.

She was to be paid A$11,700 to be the surrogate mother, and has told media that she agreed to the arrangement because she had a large debt that she would not otherwise be able to pay.

After implantation of the embryos, it was discovered Pattharamon was pregnant with twins.  She was offered an additional A$1,637 for the second child.

Four months into the pregnancy, one of the twins was diagnosed with Down’s Syndrome. The Australian couple insisted that Pattharamon undergo an abortion, but she refused because she considered abortion to be a sin.

Pattharamon gave birth to Gammy and also to a healthy baby girl. In addition to Down’s Syndrome, Gammy also has congenital heart disease.

The Australian couple took the baby girl, but left Gammy behind to be cared for by his mother, who was paid just under A$11,000 of the money promised to her.

Commercial surrogacy is illegal in Australia.

Any surrogacy arrangements must be altruistic, with the birth mother only reimbursed for reasonable expenses.

India has been a popular destination for Australians, but because Indian law only allows heterosexual couples to participate in surrogacy arrangements, Thailand is becoming increasingly popular for same-sex couples and single people.

It is estimated that at any one time, there are 20 Australian couples in Thailand for the birth of their children.

It also required the surrogate mother to be single because, if she was married, her husband automatically becomes the child’s father under Thai law.

What this meant was that the only women who were eligible to be surrogates were single mothers, leading to the risk that vulnerable women could be exploited in surrogacy arrangements.

The risk of exploitation is increased because many of these women cannot afford lawyers to review their contracts, and sign documents that they do not understand.

There have also been stories emerging in recent times of women being taken advantage of by the surrogacy agencies, including the withholding of fees and the requirement to be in supervised accommodation for the duration of the pregnancy.

Following the case of baby Gammy and others similar incidents where biological parents have rejected a baby born with a “defect” and withheld payment from the surrogate mothers, the Thai government has tightened its laws. Commercial surrogacy is no longer permitted in Thailand.

This has put a number of arrangements in Thailand where the surrogate mother is already pregnant in doubt, and has also reignited the debate about the legalisation of commercial surrogacy in Australia.

The fundraising site for Gammy is: http://www.gofundme.com/bxci90

Monica Doumit has a Bachelor of Medical Science, a Bachelor of Laws and a Masters of Bioethics. She is the Coordinator of Catholic Talk │www.catholictalk.com.au