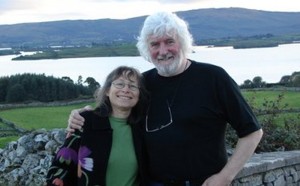 A married couple, both of whom spent long times in prison for crimes they did not commit, were key note speakers at an international conference last weekend in Dublin for Retrouvaille leaders.

Sonia ‘Sunny’ Jacobs and Peter Pringle each served years on death row—Jacobs 17 years in the United States and Pringle 15 years in Ireland.

Both were exonerated after their convictions were overturned for murders they did not commit.

According to their website, they attribute much of their strength and survival to the yoga and meditation practices they developed in prison.

The couple met at an Amnesty International meeting while both publicly campaigning against the death penalty and they fell in love.

Their wedding in late 2011 was perhaps the first of its kind: the union of two exonerated death row inmates.

Last weekend they addressed the European meeting of Retrouvaille, an organisation helping troubled marriages, on the topic of reconciliation and healing.

“It was a powerful witness,” Patrick Duff from Retrouvaille told CatholicIreland.net. “People were crying.”

Both partners had much to forgive.

Sunny Jacobs (67) was sentenced to death at the age of 28 for the murder of two police officers in Florida. When she was imprisoned, her two young children were put into the foster care system.

Nearly 17 years after her arrest, Sunny’s conviction was overturned on appeal. In the meantime, her boyfriend Jesse Tafero, also convicted of the double murder, was executed.

“I went into prison in my 20s as a mother, a daughter and a wife. When I came out I was a widow, an orphan and a grandmother,” she relates.

For years she struggled with loss and anger and a sense of betrayal. She could have held on to her anger, “but it didn’t serve me,” she says.

“I realise we were given free will. It is not God, it is us. Once I took on my own responsibility, I didn’t have to forgive God, I had to thank him because he gave me the tools.”

Sunny shares that the “only way out is forgiveness”. “How long does it take?” she asks. “The rest of your life – everyday.”

The testimonies of Sunny Jacobs and Peter Pringle who now live in Connemara, were accompanied by those of four other couples from Retrouvaille who bore witness to the power of forgiveness in marriage, and how it is always possible to start over.

Introducing the testimonies, Marian Duff said that in Retrouvaille they called themselves “broken healers”.

“With empathy we can say to hurting couples we know how you are feeling and they believe and trust us having heard our testimonies. They are comforted realising that they are not alone and can journey with couples who have travelled the same path before them.”

Retrouvaille is a community of married couples and priests supporting each other through the challenges and the opportunities of marriage and family life and religious ministry.

Twice a year they hold Retrouvaille weekends to help couples passing through difficulties in their marriages. In the coming year the organisation aims to improve awareness of its programme, and increase the number of programme presenters.

Among those attending last weekend’s European meeting, were a number of bishops, priests and representatives of families and marriage ministries.

“We need to get the word out about Retrouvaille,” said Patrick Duff so as to have greater numbers attending their twice yearly weekends.

According to Patrick, who with his wife Marian is co-ordinator of Retrouvaille in Ireland, problems in marriages boil down to a lack of communication.