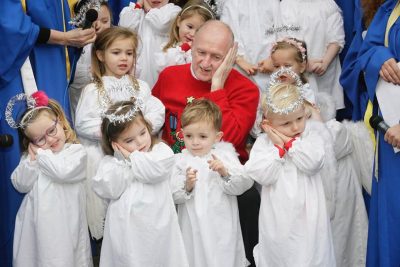 The gift of a live animal crib from rural Ireland to city dwellers has been welcomed again this year at the Mansion House in Dublin.

Lord Mayor of Dublin, Nial Ring, and President of the Irish Farmers’ Association (IFA), Joe Healy, were present for the opening of the IFA Live Animal Crib, which people can visit until lunchtime on Christmas Eve.

“The Crib allows us to celebrate and appreciate the simplicity of the Christmas message and is an enjoyable tradition we look forward to each year at the Mansion House,” said Nial Ring.

He thanked the IFA for providing the animals and for caring for them every day at the crib and said: “Any donations received will be distributed by the Mansion House Fuel Fund to some very worthy charities to help those in need in Dublin.”

IFA President, Joe Healy, said that the IFA partnership with the Lord Mayor and Dublin City Council gives all the families who visit the chance to see a live nativity scene.

“The Christmas experience may have evolved, but the nativity remains at the centre of what Christmas is all about. However busy you are, I would encourage you to take some time between now and Christmas Eve to visit the Mansion House. It’s a reminder of what farmers contribute and it’s an opportunity to donate to the Lord Mayor’s Fuel Fund.”

The crib has been a joint venture between Dublin City Council and the IFA since 1995. It is constructed by Dublin City Council’s Housing Maintenance Section. The life-size stable includes sheep, a donkey and a goat, which are provided and cared for by the IFA.

The animals are brought in each morning and returned to a farm on the outskirts of the city each evening. The Dublin Society for the Prevention of Cruelty to Animals also advises about the care of the animals. 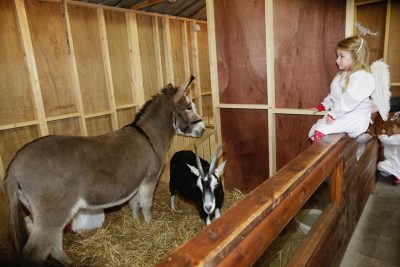 It is one of the oldest charities in Dublin and distributes cash grants through a number of charitable bodies of many creeds and none. Charities that have benefitted in recent years include the St Vincent de Paul, Dublin Simon and Abbey Presbyterian Church Hamper Fund.

The Mansion House Fuel Fund is the Lord Mayor’s only personal charity and he meets twice a year with a committee to decide about grants to be allocated to the recognised charities during winter.