Home > News > Count down to Rally for Life in Dublin

Count down to Rally for Life in Dublin 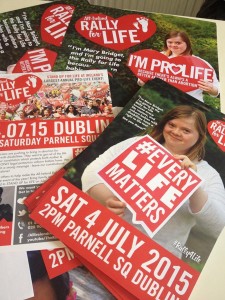 Up to 10,000 people are expected next weekend in Dublin for the All Ireland Rally for Life.

The meeting place for the rally is Parnell Square at 2pm.

Pro life supporters will then walk through Dublin city to Molesworth Street outside Dáil Eireann where a number of speakers will address the rally.

This year’s theme is ‘Every Life Matters’.

“We chose that theme because there is a big attack on at the moment, targeting children with disabilities and those in life limiting conditions,” organiser Ide Nic Mhatuna told CatholicIreland.net.

“We will be saying that no matter how short your life is, you have right to life because you are a human being,” she added.

At Molesworth Street, Mandy Dunne from ‘Every Life Counts’ will address the crowd.

She will be joined by a number of other speakers including Niamh Ui Bhriain from the Life Institute, Bernadette Smyth from Northern Ireland’s pro life group Precious Life, rapper Evans Junior and Mary Brigid, the girl featured in the rally posters.

“Our country is saturated by pro abortion propaganda,” said Ms Nic Mhatuna, “But I believe truth is on our side, the facts, science and medicine are on our side,” she said.

Ms Nic Mhathuna said that pro life people had to “break through the propaganda and lies that are everywhere”.

She appealed to people to talk with their friends and families about the issue of abortion.

“There is great power in talking with people in our community, with friends, neighbours and family. Open up that discussion. It is crazy the amount of people who still believe that Savita Halappanavar died because she didn’t have an abortion. We’ve got to talk to people, one on one.” 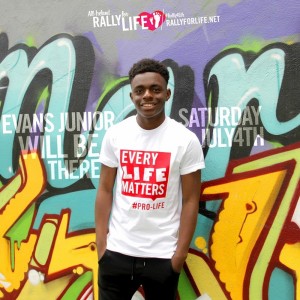 The Life Institute’s current goal is to start a “proper national conversation” where people can talk without being shouted down.

Asked if the middle ground in Ireland was shifting towards an acceptance of abortion, Ms Nic Mhathuna said she wasn’t surprised if this was the case because people were “absorbing propaganda”.

There was a ‘David and Goliath’ battle going on in relation to funding.

“We are facing Amnesty, the Irish Council for Civil Liberties and the National Women’s Council,” she said.

American millionaire Chuck Feeney through Atlantic Philantropies has given grants to all three.

In 2013, the company awarded Amnesty Ireland over $900,000.  (see http://www.atlanticphilanthropies.org/grantee/amnesty-international-ireland-foundation).

The Life Foundation, Youth Defence and Precious Life, organisers of the all Ireland Rally for Life, are appealing to the public to attend the march in great numbers and to start conversations about the issue of life.

Ms Nic Mhatuna said there were many good websites which people could use to inform themselves including international sites like www.lifesitenews.com and www.studentsforlife.org.