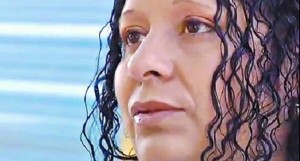 Alejandra Pereyra “I couldn’t believe it was happening.”

Alejandra Pereyra was knitting when her mobile phone rang. The caller display showed  ‘private number’.  She answered the phone.  “Is that “Alejandra Pereyra ?” said a male voice.  She replied, “Yes, who is speaking?”  “It’s Pope Francis” was the reply.

The 44-year-old mother of six was so shocked she said, “What, can you say that again?” Pope Francis reassured her that it was really him on the line.  “It was like being touched by the hand of God,” she told Canal 10, the TV station covering the Cordoba region of Argentina.

She had written to the Pope in mid August asking for his help after she was raped twice at gunpoint by a police official.

She made many complaints to the police about it, but received no justice and believes local officials are covering up the crime.  She alleges they have even promoted the perpetrator.

“With all the pain I carry in my heart dear Holy Father, I ask you for your help because after all the talk of rape, they finally did it,” she wrote.

“The Pope told me he receives thousands of letters each day, but that what I wrote moved him and touched his heart,” she said.

In a half-hour long conversation, focusing on faith and trust, the Pope told her that she was not alone and to have faith that justice would be done.

“The Pope listened attentively to my story,” said Alejandra.  “I’ll do anything now to go to the Vatican. He told me he would meet with me.”

In her interview with Canal 10, Alejandra said that the Pope asked her where she lived and when she told him it was at Villa del Rosario, he said he would pray for all the people of the town, and he asked her to pray for him too.

Alejandra said of her conversation with the Pope, “He restored faith and peace in me and gave me strength to carry on fighting for my children, my husband and myself.”

The phone call is one of several calls Pope Francis has spontaneously made since being elected pontiff in March.

According to the CNA news agency in the US, he has also called an Italian man who struggled to forgive God after the murder of his brother; a young doorman at the Jesuit motherhouse in Rome; his shoemaker in Argentina; and the owner of the kiosk in Buenos Aires that delivered his daily paper.

As recently as Monday of this week, he is reported to have called the mother of an Italian petrol station owner who was shot dead in June.