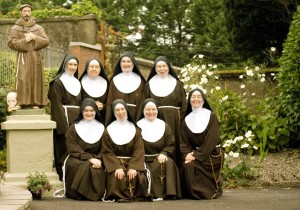 The Poor Clare community in Cork.

Cork’s Poor Clare community on Monday marked the feast day of St Clare as well as the centenary of the establishment of their monastery in the city.

A special Mass was held to close a weekend of special ceremonies for the two events.

Speaking to the Examiner newspaper, Sr Colette Marie, the Mother Abbess, described the community as deeply grateful to the general public, especially to generations of people in the Diocese of Cork and Ross who have helped and supported their community over the last 100 years.

The nuns live solely on alms provided by their generous Benefactors.

“Depending totally on God, shows that everyone can trust in God’s care,” Sr Colette Marie said.

Bishop John Buckley of Cork and Ross said the monastery has been a “powerhouse of prayer” for a century despite the fact that the Sisters remain hidden.

“How many have written or called to the monastery when unemployment, emigration or illness struck?” he said.

According to Sr Colette Marie, “We have deep joy in our life and this joy is something that God wants everyone to have.”

The community recently launched a booklet, written by Fr Pat Conlan, a Franciscan, which tells the history of the Cork monastery.

The Cork monastery, which was founded in 1914, was financed by a wealthy local businessman, Walter Dwyer, whose daughter, Mary (Sr Maria), was a Poor Clare sister based in Tournai, Belgium.

He wanted her to be closer to him as death approached and so he undertook to fund the building of the Poor Clare Monastery on College Road, so as to enable Sr Maria, together with a few Sisters from the Poor Clares in Carlow, to begin Poor Clare life in Cork on Christmas night 1914, when Midnight Mass was celebrated.

There are plans to mark that milestone this Christmas.

Since then the Cork Poor Clares have made two foundations, both in the 1950s, one in Scotland and one in Ennis, Co Clare.

The celebration of the Eucharist is at the heart of Poor Clare life and the Cork chapel is open all day for Eucharistic Adoration.

The Sisters pray the Divine Office six times during the day and once during the night, when they rise at midnight for prayer and Eucharistic Adoration.