Cork missionary honoured for her work in South Korea 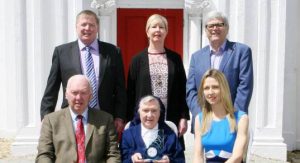 A nun who is considered an iconic figure in South Korea has been named Cork Person of the Month for June.

Sr Philomena O’Sullivan, a Columban sister whose family are from Lombardstown and Mallow, has been recognised for her life’s work as a nursing missionary in Korea.

“Fifty-five years ago this month, I arrived in Seoul, Korea with my companion, Sr David Mannion. We travelled by boat from Cobh, Co. Cork to New York and were met on arrival by sisters from our Boston house. From there, we travelled on a Swedish freighter from Los Angeles to Tokyo, via Manila. From Tokyo, we boarded a US army plane to Seoul in Korea,” said Sr Philomena.

Her journey did not end there. “Following our arrival in Korea, we set out by train for Mokpo, a southerly seaside town. Back then, it was a 12-hour journey; these days it’s merely a short two-hour trip!” she said.

Sr Philomena had made her profession in 1949, and trained as a nurse at Mercy University Hospital, Cork. When she left Ireland for Korea in June 1955 with Sister Mary David Mannion, a doctor, they were only the second group of sisters to arrive in Korea. Sr Philomena spent six months in Mokpo before moving to the northern part of the country, where she and her colleagues established a Clinic Foundation.

“The Columban sisters had recently opened a clinic in Mokpo and people flocked there, often queuing up from late at night to receive medical treatment. We were able to source medicines from the US, samples from doctors’ offices and some of the pharmaceutical companies. We also received help from the US army which enabled us to treat the local people at our clinic,” she recalled.

Sr Philomena follows previous Cork Person of the Month winner, the rugby hero Donncha O’Callaghan, and before him Sinead Kane who ran seven marathons in seven days on seven continents.

She will now go forward, with the other Persons of the Month chosen so far this year, for possible selection as Cork Person of the Year at a Gala Awards Lunch at the Rochestown Park Hotel in January 2018.

Awards organiser Manus O’Callaghan said: “The incredible work of Irish missionary sisters like Sr Philomena is not well known in Ireland, but they are recognised as heroines in the countries they work in. To this day, Sr Philomena O’Sullivan is considered an iconic figure in South Korea and I’m delighted that we have this opportunity to acknowledge her lifelong dedication to missionary work.”

Sr Philomena and her colleagues faced an extremely turbulent environment when they arrived at the end of the Korean War. A large number of their patients had been forced to flee North Korea and were suffering from tuberculosis and malnutrition. Many people also required treatment for landmine injuries inflicted during the war.

After 17 years working in post-war conditions, Sr Philomena was transferred to Mokpo in the south of the country, to continue her work with the poor and the sick at a local hospital. She became Regional Superior of all the Sister Communities in Korea.

At home in Ireland in 1971 she studied midwifery at St Finbarr’s Hospital. In 1974 she returned to Korea, establishing a base in Cheju, an island off the coast of Korea, where she set up a clinic. Together with another nun who had previously worked in the Foxford Woollen Mills knitting industry, she helped develop a weaving industry, providing local employment.

Following a stroke in 1977, Sr Philomena lost her voice and returned home to Ireland to recuperate. In 1979 she returned to Mokpo where, along with two doctors and four sisters, she opened a hospital where she worked in paediatrics and outpatient clinics. During this time, Sr Philomena also cared for patients in a leper colony on Sorokdo Island, off the coast of South Korea.

Having spent more than 50 years working in Korea, she celebrated her Diamond Jubilee in 2009 when she returned to Ireland. Now retired, she lives with her fellow Columban Sisters in Magheramore, Co Wicklow.