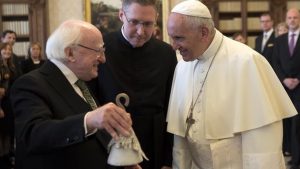 Pope Francis received President Michael D. Higgins at the Vatican on Monday and a possible papal visit to Northern Ireland was discussed briefly during the meeting.

The 15-minute private audience was held in the Papal Library and, according to the Vatican’s press office, “several themes of mutual interest” were discussed.

The President’s meeting with the Pontiff comes just over a year ahead of Pope Francis’ expected visit to Ireland in August 2018 for the World Meeting of Families.

After his Vatican meeting, President Higgins told the media, including RTÉ, that “There is agreement that circumstances have changed and that there is a better prospect and more scope” for a visit to Northern Ireland.

President Higgins also met the Vatican’s Secretary of State, Cardinal Pietro Parolin, who was accompanied by Mgr Paul Richard Gallagher, Secretary for Relations with States. The meeting lasted for an hour.

The possibility of a papal visit to Northern Ireland next year was also discussed during this meeting.

The President, who is known to hold the Argentinian church leader in high regard, discussed a range of issues of mutual interest during his meeting with Pope Francis.

In a statement the Vatican said the “cordial discussions” ranged over issues that unite the Vatican and Ireland and on which they can collaborate.

These included the protection of the rights of humanity at every stage and condition of life, migration and the welcoming of refugees, safeguarding the environment, and sustainable development.

Special attention was paid to the young and families as well as the impact of globalisation, especially at an economic level.

There was an exchange of views on the future prospects of the European project in the wake of the vote for Brexit.

According to the Irish Times, a spokesman for the President said after the meeting, “The President and Pope Francis spoke of their shared conviction that new connections between ethics, economy and ecology must be at the core of all work of social and intellectual reconstruction in this new century.

“They also agreed that there can be no resolution to the issues we face without an engaged alternative to what the Pope has referred to as ‘the globalisation of indifference’.

“The President and Pope Francis agreed on the need for the sense of urgency that attaches to present challenges to be recognised in the agendas of meetings such as the upcoming G7 meeting in Taormina, and acceptance of the need to craft new and effective responses to global challenges. In particular, they agreed on the need to turn commitments on which the public had placed their trust into outcomes and action.”

President Higgins and his wife Sabina presented Pope Francis with a Climate Bell designed by the Irish artist Vivienne Roche.

Pope Francis presented the President with a medallion with an inscription from Isaiah, in which the prophet refers to the desert becoming a fertile field, and the field then becoming a forest. He also presented him with copies of his encyclical on climate, Laudato si’.

Later on Monday, the President met Irish priests and staff working in the Vatican and attended a reception at the Irish College in Rome.

At the Irish College, President Higgins said he and the Pope also discussed the “urgent and wider task of building new paths of hope and renewal for European citizens”.

Paying tribute to Pope Francis, President Higgins said he had been an “indispensable voice of humanity and clarity” and that he was looking forward to the Pope’s planned visit to Ireland next year.

He said many people would be “inspired, strengthened and challenged” by it.