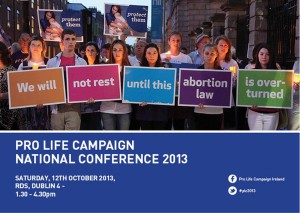 Huge interest in the Pro Life Campaign’s national conference tomorrow (Saturday 12 October) has resulted in the conference being moved from the Alexander Hotel to a larger venue at the RDS Concert Hall in Dublin.

“It shows the level of enthusiasm,” Wendy Grace from PLC told CatholicIreland.net.

“People are meant to be downtrodden and they’re not. The conference numbers used to be steady. The fact that we are moving to a different venue is encouraging. People want to get actively involved.”

The RDS concert hall holds twice the number of the original venue, around 800.

Following the recent passage into law of the Protection of Life in Pregnancy Act which introduced abortion for the first time in Irish history, keynote speaker at the conference, Steven Ertelt, told CatholicIreland.net that he would be encouraging the Irish people to “continue fighting against abortion.”

“I want to talk about some of the successes we’ve had in the US, in terms of closing abortion centres, reducing the number of abortions and passing pro life laws,” he said.

Steven Ertelt, the founder and Editor of LifeNews.com is President of Colorado Citizens for Life and a member of the board of directors of the National Right to Life Committee.

Recognising that many pro life people were discouraged after the passage of the bill, Mr Ertelt said it was important now to “mount a bid to reverse the law, either by referendum or through legislation”.

To this end, earlier in the week he met a cross-party group of TDs and Senators and they talked about “the implementation of this bill, to find ways that the Government can have some oversight and accountability in this process”.

“One of the big tasks for the pro life community in Ireland is to make sure that that door which has been opened a little bit for abortion, doesn’t swing wide open to allow for abortion on demand, in the same way as we have in the US or the way they have in the UK,” Mr Ertelt said.

Addressing the question about what steps ordinary people could do to reverse the law, he appealed to people to have the courage to speak in public about life issues, to make people aware for example, of how abortion adversely affects women’s health.

“In the US we have tens of thousands each and every year who come forward who have had abortions and who talk about how abortion has hurt them and who encourage other women not to make the same mistakes.”

Typically these women have suffered mental health problems: addictions to alcohol, drugs and depression or medical problems like breast cancer and premature birth of a subsequent child.

Other speakers at the conference include, Hilary Ní Lorcáin, whose moving story of the life of her baby daughter who lived just two and a half days featured in the Irish Independent, Caroline Simons and Adele Best of Women Hurt.

Members of the Oireachtas who broke the party whip to vote against abortion will also be in attendance. Entry to RDS Concert Hall is via Merrion Road.