Home > Featured > Constitutional protection of unborn life to be eroded

Constitutional protection of unborn life to be eroded

Ireland’s constitutional protection of the right to life of the unborn looks set to change following a vote in favour of amending Article 40.3.3 of the Constitution by 89 members of the Citizens’ Assembly yesterday (Saturday 22 April). 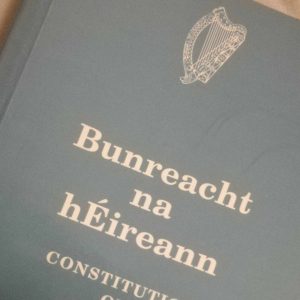 The Assembly held a series of votes on how it believes the constitutional protection of the unborn should be dealt with. In the first vote, nearly 87 per cent voted against retaining the article exactly as it is at present.

In a second ballot, the Assembly voted by more than 56 per cent against fully repealing the article, i.e. deleting it, and voted in favour of replacing or amending it instead.

In both the first and second ballot, two members of the Assembly abstained from voting. In the third ballot, three Assembly members abstained, and the vote produced the closest result – with 57 per cent voting in favour of replacing the constitutional protection with a provision that “explicitly authorises the Oireachtas to legislate to address termination of pregnancy, any rights of the unborn, and any rights of the pregnant woman”.

The alternative, supported by 43 per cent of voters, was a recommendation for a new constitutional provision “that directly addresses termination of pregnancy, any rights of the unborn, and any rights of the pregnant woman”. In real terms, the number of votes cast in favour of the two alternatives was 51 and 38. 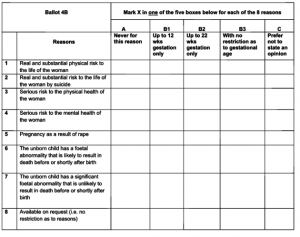 Reacting to the ballot, the Life Institute said that the Citizens’ Assembly’s decisions were no surprise.

“From the beginning, the Citizens’ Assembly was a farce that openly showed its bias by giving a platform to abortionists and extremists,” said Niamh Uí Bhriain of the Institute. “It is both shocking and sad that Assembly members have been led to believe that they can take the right to life away from other human beings, simply because preborn children are weak and defenceless and cannot defend themselves from attack.

“The unborn child was mostly ignored by the Assembly, but that is not happening in the real world, and the government cannot control the debate outside of the Assembly. We’re confident that Ireland’s protection of mother and baby will be retained when it comes to a referendum.

“The Assembly was designed by the government to justify legalising abortion, even though exit polls after the last election showed that abortion was only a priority for 2 per cent of the electorate.”

According to Uí Bhriain, public opinion is increasingly swinging against legalising abortion.