Home > News > Consider what a vote for Labour means: PLC

Consider what a vote for Labour means: PLC 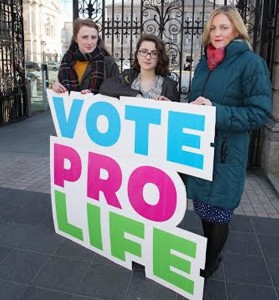 As voters go to the polls today in the Republic’s 40 constituencies, the Pro Life Campaign has warned voters to think carefully about what the Labour Party’s policy on abortion actually means.

“No amount of euphemistic language from Labour can disguise the fact that what they are proposing is identical to the abortion regime that exists in England, where all respect for unborn human life has been completely stripped away,” said PLC’s Deputy Chairperson Cora Sherlock.

“For example, in England, 90% of babies diagnosed with Down’s Syndrome are aborted.”

She said as a society people needed to reflect on the “horror of what is contained in Labour’s proposal and the total disregard it shows towards innocent and defenceless human life.”

She was also critical of on Taoiseach Enda Kenny’s idea of setting up a citizen’s convention after the election to look at the issue.

“It has all the appearances of a repeat of what happened in advance of the abortion legislation in 2013.”

Back then, said Ms Sherlock, the Taoiseach initiated Oireachtas Hearings, then ignored the expert medical evidence presented to them.

“Not once has the Taoiseach defended all that is positive about the 8th Amendment and the fact that there are thousands of people alive today because of our pro-life laws.”

Describing the Labour proposal as a “betrayal of women”, Ms Sherlock said what was being proposed “would do nothing to empower women or meet their needs when faced with an unexpected pregnancy. Many women who regret their abortions say that all it would have taken is for one person to have offered them support and encouragement and they’d have continued with their pregnancy.”

Labour’s proposal is the opposite of empowerment and freedom. In the name of ‘choice’ it pretends there is no social or emotional cost involved in going through with an abortion.”

In Dun Laoghaire, the constituency that is likely to have the largest quota of more than 16,000 votes, Christians from a variety of denominations have put together and distributed a leaflet appealing for voters to consider three issues in particular in the elections: the Eight Amendment, Persecuted Christians and Marriage and Family values.

“We are a cross-denominational group of Christians who live and vote in the Dun Laoghaire constituency and are not members of any Political Party or Group,” says the leaflet which has 28 signatories and which outlines the views of each of the 11 contenders for the three seats on the issues mentioned above.

They pay tribute to the current government for turning the economy around.

“135,000 people have come off the dole queues and some of those who emigrated are considering coming back. This must be acknowledged,” they say.

“However this Fine Gael-led Coalition also did a lot to undermine Christian values and sadly continued the process of dismantling the Judeo/Christian ethos of Irish society.”

“We want to see stability in our country and a return to the Judeo/Christian values that have underpinned all of Europe in the past,” they say.

Noting that the outcome of the election is unpredictable, they say it is “critical that a strong Pro Life representation is returned to the Dáil as Fine Gael, Fianna Fail, Renua and Direct Democracy Ireland are committed to a free vote on moral issues.”

Polls open this morning at 7am. Over three and a quarter million people are registered to vote.