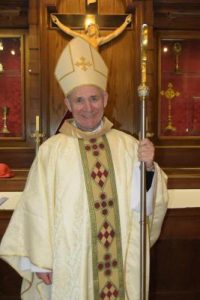 A British-based Irish bishop has called for the UK Government to waive the EU citizens’ registration fee for those who are struggling financially.

EU citizens will have to apply for permission to live and work in the UK after Brexit Day on 29 March 2019, when Britain leaves the European Union. At present, the British government is proposing a registration fee of £65 (€73) for all adults and £32.50 (€36.50) for all children.

Like other Irish citizens living in the UK, Belfast-born Bishop McAleenan will not have to register with the UK immigration authorities because of the existence of the Common Travel Area (CTA), which covers the UK, the Republic of Ireland, the Isle of Man and the Channel Islands. The CTA predates the existence of the EU, the EC and the EEC.

Bishop McAleenan, who is responsible for all ethnic chaplaincies in the Diocese of Westminister, and is the lead bishop for migration and asylum issues on the English and Welsh Bishops’ Conference, has written to the UK immigration minister Caroline Nokes calling for “a fee-waiver for larger families, people in particularly vulnerable positions or those facing economic hardship”.

The bishop points out that the Church’s concern in this matter is justified as the majority of EU citizens in the EU are Catholic, and safeguarding their rights is a priority for the Catholic Church.

Following discussions with Catholic parishes and charities, the bishop says it is clear that the proposed registration fee was likely to be “a significant barrier for some people who wished to continue living in the UK and contributing to our society”.

“The impact is likely to be particularly severe for larger families on low incomes, many of whom are already unable to afford basic outgoings such as food and household bills, and may now need to spend several hundred pounds on applications under the EU Settlement Scheme,” the bishop said.

The British government has indicated that unregistered EU citizens who are long-term residents face being deported as illegal aliens.

“In the most severe cases particularly vulnerable people, including many of those who are currently homeless, will simply be unable to pay the registration fee at all, meaning they will lose their status or the cost will fall on charities with already very limited resources,” Bishop McAleenan said.

In the letter to Caroline Nokes, he wrote: “I therefore urge you in the strongest possible terms to include a fee-waiver for larger families, people in particularly vulnerable positions or those facing financial hardship.”