Complexity and totality of Irish involvement in WWI recalled 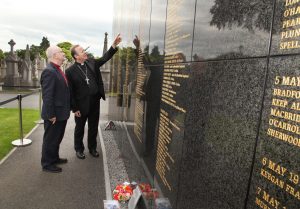 The Primate of All Ireland has said he hopes his participation in a pilgrimage to mark the centenary of the Battle of the Somme will help the many Irish Catholics whose family members served in the British army in World War I to talk about it.

Speaking in Glasnevin Cemetery as a cross community group from Northern Ireland and the Republic visited the 1916 Memorial Wall before setting off on a centenary pilgrimage to the sites of the Battle of the Somme, Archbishop Eamon Martin told CatholicIreland.net, “Many Irish Catholics don’t really talk about their involvement in the British army and yet tens of thousands of Irish people joined the British army and Ulster regiments.”

He continued, “Many Irish Catholics who were in the British army were largely forgotten or erased from history. I know that there are many families, including my own, who have had people who fought in the British army and who then more or less kept it quiet about it for many decades.”

The Archbishop said his visit to France and Belgium with Archbishop Richard Clarke and thirty young adults would be “a symbolic one that will give leadership and maybe permission to people to talk about these things and find out a little bit about family members who fought or died in the war.”

The group of thirty young adults, bishops and clergy from protestant and catholic parishes in the Republic and Northern Ireland visited the 1916 Memorial Wall in Glasnevin Cemetery yesterday where they learned about some of those who fought in World War I and then died in the Rising. 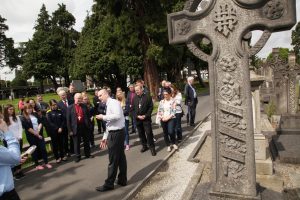 Over today and tomorrow they will visit the Ulster Tower in Thiepval in France; attend a wreath laying ceremony at the Menin Gate, Ypres in Belgium and visit the Irish Peace Tower in Messines.

Speaking ahead of the pilgrimage, Archbishop Clarke suggested that the pilgrimage would be “far more than a purely physical journey”.

“Coming as we do from very different contexts (both spiritually and geographically) and also carrying very different understandings of our history, we have much to share with one another and much to learn, as we travel and pray our way through places that carry such huge symbolic importance for us all.”

Archbishop Martin explained that he and his Church of Ireland counterpart “very deliberately didn’t do this on our own” but involved young adult leaders from the Archdiocese and Diocese of Armagh; as well as the Church of Ireland dioceses of Clogher and Cork and from the Catholic diocese of Kildare & Leighlin.

“We are hoping that they will meet each other and talk together and that there will be that encounter which they will come home and talk to their friends about and go on social media about.”

The Battle of the Somme was fought by the British and French against the Germans. It took place between 1 July and 18 November 1916 on both sides of the upper reaches of the River Somme in France.

It was the largest battle of World War I on the Western Front; more than one million men were wounded or killed, making it one of the bloodiest battles in human history.

Among the dead were over 3,500 soldiers from Ireland, with many more wounded.

This large loss of life was made even more horrendous by its occurrence within the short space of the first day of the Battle and two days in the following September.

Archbishop Martin also revealed that the journey would be a personal one for him as he is hoping to find the grave of his granduncle who died in Ypres in 1917 – one of two uncles who fought in the Great War.

He said he hoped the pilgrimage would instil in the young adults “A sense of the futility of war and therefore the importance of friendship, peace and understanding”.

Dr Martin said he and Archbishop Clarke were demonstrating by their presence that they “are totally committed to peace building. We feel that this is a courageous enough step to do together which hopefully, in some small way, will contribute to greater understanding of each other and to peace.”

He also hoped that the young adults on the pilgrimages would get a sense of the age of those who died at the Somme. “We are talking about people who are their age – a whole generation of youth in Europe was cut down.” 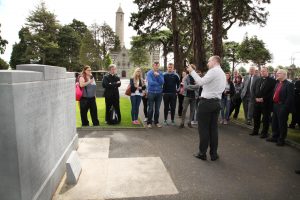 Asked about the potential for the 1916 Rising or the Battle of the Somme to be divisive, the Church of Ireland primate, Archbishop Clarke suggested that young adults “don’t have the blinkers that perhaps some of the rest of us older people have inherited” and so were more open to seeing the complexity and totality of Irish involvement.

One of those on the cross community pilgrimage was Dermot Kelly, a Youth Director in Armagh diocese. He explained that his great grandfather Joseph Hamilton had died in the Battle of the Somme.

He called for a greater investment in peace and reconciliation in Northern Ireland. “The past can’t be repeated. I think people think peace is just going to happen naturally – there needs to be more and more people educated about it so as to build better bridges. I think connections will be made here on this trip.”

Referring to the thousands of Irish war dead, he said he himself had recently learned of the death of a distant cousin who served in the Royal Dublin Fusiliers and was killed in the war.

The bishop, who hails from Slane Co Meath, the home village of the poet Francis Ledwidge who died in Ypres, explained that he intended to visit the poet’s grave on the trip.

“His death and the death of thousands of others in deplorable conditions – there is morality and immorality in all these questions. Our journey is essentially a religious journey, and a historical journey to commemorate and remember,” he said.