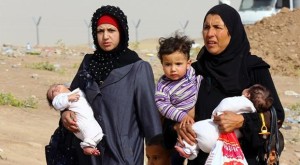 The Pope’s visit to Lesbos on Saturday 16 April has been welcomed as “a humanitarian gesture of extraordinary significance” by the Commission of the Bishops’ Conferences of the European Community.

In a statement, the General Secretary of COMECE, Fr Patrick H Daly, also hailed the ecumenical dimension of the visit to the refugees and citizens of the Greek island of Lesbos together with the Ecumenical Patriarch Bartholomew and Archbishop Ieronymos of Athens, Primate of the Church of Greece.

“At the very outset of his pontificate, in visiting the rocky Italian outpost of Lampedusa, Pope Francis displayed his concern for those many migrants who put their lives at risk in order to seek refuge in Europe,” Fr Daly said.

He added that the fate of migrants and asylum seekers has long been a central concern of COMECE and that the organisation repeatedly saluted the way in which the Pope, in word and deed, has drawn attention to the plight of those fleeing the dangers and suffering of war and violence and/or desperate poverty in their home countries to reach a better life in Europe.

“The ecumenical dimension of all COMECE’s work on migration in Brussels, not least recent dialogue seminars organised together with CEC/CCME on the subject, adds greatly to the resonance of the Church voice on an issue likely to dominate the EU agenda for years to come,” he stated.

Fr Daly said COMECE welcomed in principle the conclusions of the European Council on 17 December 2015 and addressed the EU heads of Sate and government with a document of concrete proposals.

The Commission of the Bishops’ Conferences of the European Community, according to Fr Daly, wishes to add its voice to those requesting a fresh look at the EU’s arrangements with Turkey.

“We would plead that the dignity of human beings, their fundamental rights, including the right to seek protection, the humane treatment, the best interests of children, the “non-refoulement” obligation and the right to family life, be respected under all circumstances.”

The insufficient safe and legal ways to enter the European Union in search of protection forces asylum seekers and migrants to rely on smugglers, thus in danger of falling easy prey to traffickers in human beings and other criminals COMECE warned.

Thousands of asylum seekers have already died in their dangerous journey in the Mediterranean Sea.

Back in 2014, COMECE together with other Christian organisations issued a set of proposals for the development of safe and legal paths to protection in the EU and in 2015 addressed the dramatic situation of unaccompanied minors.

“Pope Francis’ visit to Lesbos is a bench-mark moment in Europe’s outreach to our suffering migrant brothers and sisters. It is vital that all 28 Member States of the European Union become aware that the refugee and migration crisis calls for a shared responsibility.”

“The only way out of the crisis is coordinated action among all EU governments. A series of proposals are now on the table including the EU Commission’s last Communication presenting different options for reforming the Common European Asylum System and developing safe and legal pathways to Europe.”

Separately, Pope Francis has asked the faithful to pray for his imminent journey among the refugees on the Greek island of Lesbos.

His visit aims to “express closeness and solidarity both to the displaced people and to the citizens of Lesbos and to all the people of Greece, who are so generous in their welcome”.

Speaking to pilgrims in St Peter’s Square, the Pontiff said he was undertaking the visit with his Brothers Bartholomew, Patriarch of Constantinople, and Ieronymos, Archbishop of Athens and All Greece, in order to express closeness and solidarity both to the displaced people and to the citizens of Lesbos and to all the people of Greece, who are so generous in their welcome.

“I ask you, please, to accompany me with prayers, invoking the light and strength of the Holy Spirit and the motherly intercession of the Virgin Mary,” he said.